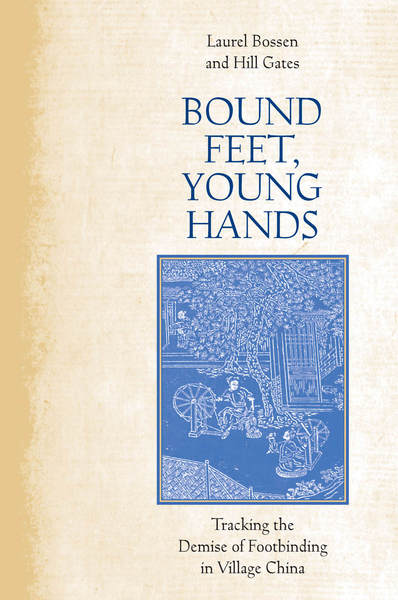 Footbinding was common in China until the early twentieth century, when most Chinese were family farmers. Why did these families bind young girls' feet? And why did footbinding stop? In this groundbreaking work, Laurel Bossen and Hill Gates upend the popular view of footbinding as a status, or even sexual, symbol by showing that it was an undeniably effective way to get even very young girls to sit still and work with their hands.

Interviews with 1,800 elderly women, many with bound feet, reveal the reality of girls' hand labor across the North China Plain, Northwest China, and Southwest China. As binding reshaped their feet, mothers disciplined girls to spin, weave, and do other handwork because many village families depended on selling such goods. When factories eliminated the economic value of handwork, footbinding died out. As the last generation of footbound women passes away, Bound Feet, Young Hands presents a data-driven examination of the social and economic aspects of this misunderstood custom.

Laurel Bossen is Professor Emerita of Anthropology at McGill University. She is the author of Chinese Women and Rural Development: 60 Years of Change in Lu Village, Yunnan (2002).

Hill Gates is Professor Emerita of Anthropology at Central Michigan University. She is the author of Footbinding and Women's Labor in Sichuan (2015) and China's Motor: A Thousand Years of Petty Capitalism (1996).

" Bound Feet, Young Hands provides a detailed, much-needed analysis of Chinese footbinding and women's labor during the late nineteenth and early twentieth century. Bossen and Gates break new ground in our understanding of the role and status of women's work during a period of enormous economic, political and cultural change."

"Bound Feet, Young Hands represents the most empirically grounded and analytically bold contribution to studies of gender, labor, and economic transformation in imperial China. Based on a staggering volume of surveys, field interviews, and local sources, this meticulously researched volume persuasively illuminates the economic rationale underlying the rise and fall of foot binding, shattering multiple strands of conventional wisdom about the social and cultural milieu of restraining the mobility of young women."

"[T]his well-written and carefully argued book makes a significant contribution to both women's history and economic history in China. Linking footbinding with women's hand labor, the book brings to light the important yet largely overlooked contributions of women, and especially young girls, to the household economy and to handcraft industry prior to industrialization in China. With this groundbreaking study, images of Chinese women idling with bound feet, which has symbolized women's submission and confinement to domestic labor, should be replaced by images of young girls laboring at textiles and handcrafts for their families and China's commercial economy."