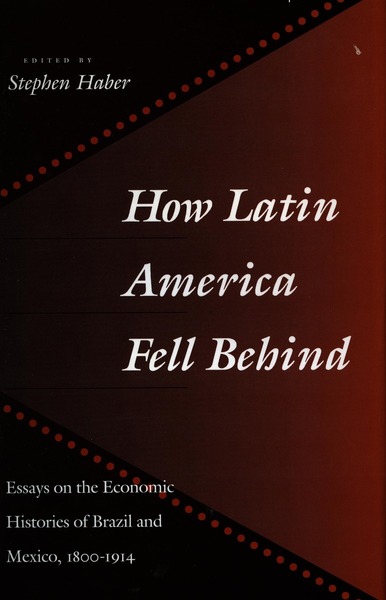 In 1800, the per capita income of the United States was twice that of Mexico and roughly the same as Brazil’s. By 1913, it was four times greater than Mexico’s and seven times greater than Brazil’s. This volume seeks to explain the nineteenth-century lag in Latin American economic development.

The essays break with longstanding dependency traditions in Latin American historiography that focus on foreign influences to explain Latin American underdevelopment. Instead, they apply the approaches and methods of the New Economic History—which encompasses a wide arsenal of analytic tools and quantitative techniques informed by neo-classical economic theory—arguing that the causes for Latin America's laggard economic growth in the nineteenth century had far more to do with internal political and legal structures than putative external dependency.

The volume is marked by geographical and topical diversity. Four essays deal with Mexico, two with Brazil, and two compare the two countries. Topically, two essays present overviews of nineteenth-century economic performance, two deal with the impact of independence, two deal with capital markets, and the remaining three address regional growth, the impact of railroads, and the economic effects of "culture." The editor's introductory essay surveys the history of economic growth theories and Latin American economic historiography.

Stephen Haber is Professor of History and Associate Dean for the Social Sciences at Stanford University. He is the author of Industry and Underdevelopment: The Industrialization of Mexico, 1890-1940 (Stanford, 1989).