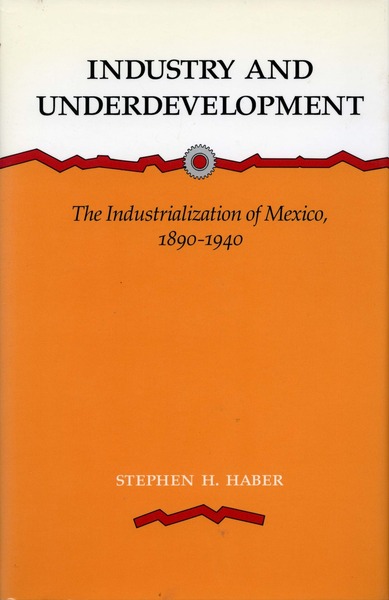 Industry and Underdevelopment
The Industrialization of Mexico, 1890-1940
Stephen H. Haber

The recent economic troubles of Mexico should have surprised no one, for the Mexican economy is an unhealthy one whose basic problems extend back to the nineteenth century - that is the major theme of this study of the formative years of industrialization in Mexico. The author focuses on the forces - economic, political, and technological - that have thwarted Mexican efforts to become a competitive member of the international economic community. Unlike most previous studies, which have relied on aggregate data published by the Mexican government that lump together all industries and all firms, this study is based almost entirely on new material concerning individual companies and individual entrepreneurs. This approach enables the author to examine a wide range of new questions. What were the social origins of Mexico's industrial entrepreneurs? What was their relation to the government of Porfirio Diaz? How profitable were the major manufacturing companies? What effects did the Revolution of 1910-1917 have on the nation's physical plant and on investor confidence? What strategies did firms follow to protect their markets and to prevent competition? The author argues that the roots of modern Mexican industrialization are not to be found in the restructuring of the Mexican economy associated with the Revolution (indeed he contends that the Revolution's effect on the economy has been exaggerated) or in the economic growth stemming from World War II. Rather, he sees the Porfiriato as the decisive era in Mexico's industrialization. By examining the economic constraints on large-scale industrialization during the Porfiriato, he explains the factors that led to an industrial sector marked by concentration of ownership, oligopoly and monopoly production, the inability to compete in international markets, and the need for constant government protection and subsidies.

Stephen Haber is the A.A. and Jeanne Welch Milligan Professor in the School of Humanities at Stanford University and a Senior Fellow of the Hoover Institution. He is the author of How Latin America Fell Behind: Essays on the Economic Histories of Brazil and Mexico, 1800-1914; Industry and Underdevelopment: The Industrialization of Mexico, 1890-1940; and The Politics of Property Rights: Political Instability, Credible Commitments, and Economic Growth in Mexico, 1876-1929 (with Armando Razo and Noel Maurer).

"Haber's book will long endure as the standard work on the subject."

"This is an outstanding book that should be required reading for anyone wishing to gain a deeper understanding of the economic problems now facing the Mexican government."

"An important new look at the history of Mexican industry. His careful discussion of the nature of the industrial system emerging in the latter part of the nineteenth century and his insights into the revolutionary and postrevolutionary periods provide an excellent basis for a better understanding of the rapid expansion of Mexican industry after 1940."