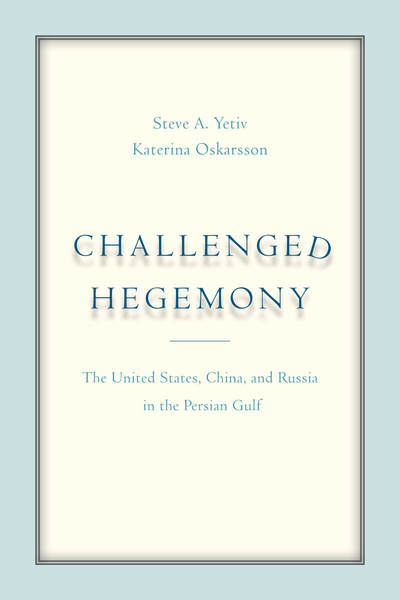 Challenged Hegemony
The United States, China, and Russia in the Persian Gulf
Steve A. Yetiv and Katerina Oskarsson

Few issues in international affairs and energy security animate thinkers more than the classic topic of hegemony, and the case of the Persian Gulf presents particularly fertile ground for considering this concept. Since the 1970s, the region has undergone tumultuous changes, with dramatic shifts in the diplomatic, military, and economic roles of the United States, China, and Russia. In this book, Steve A. Yetiv and Katerina Oskarsson offer a panoramic study of hegemony and foreign powers in the Persian Gulf, offering the most comprehensive, data-driven portrait to date of their evolving relations.

The authors argue that the United States has become hegemonic in the Persian Gulf, ultimately protecting oil security for the entire global economy. Through an analysis of official and unofficial diplomatic relations, trade statistics, military records, and more, they provide a detailed account of how U.S. hegemony and oil security have grown in tandem, as, simultaneously, China and Russia have increased their political and economic presence. The book sheds light on hegemony's complexities, and challenges and reveals how local variations in power will continue to shape the Persian Gulf in the future.

Steve A. Yetiv was Louis I. Jaffe Professor of International Relations at Old Dominion University.

Katerina Oskarsson is a consultant to NATO on the Middle East and global security; Deputy Chief Resilience Officer for the City of Norfolk, Virginia; and an adjunct professor of international relations at Old Dominion University.

"Challenged Hegemony is a tour de force. This is a major work of scholarship on the United States, primarily, along with China and Russia, as participants in the political economy and security of the Persian Gulf. Establishing the importance of the question of US hegemony in regional, as opposed to strictly global, terms, Challenged Hegemony sees more continuity than change in the role of the US in the Persian Gulf. It should be required reading for those with interests in American foreign policy, the Persian Gulf and international relations in general."

"This engaging book studies a key question that will be of enduring interest to academics, policymakers, and the broader public: the future of US relative power. Challenged Hegemony addresses this essential issue in a novel way, by analyzing US, Russian, and Chinese relative capabilities at the regional level. The data challenges what many analysts believe to be true and convincingly argues that the United States is not in relative decline, at least in the Middle East, but on the rise."