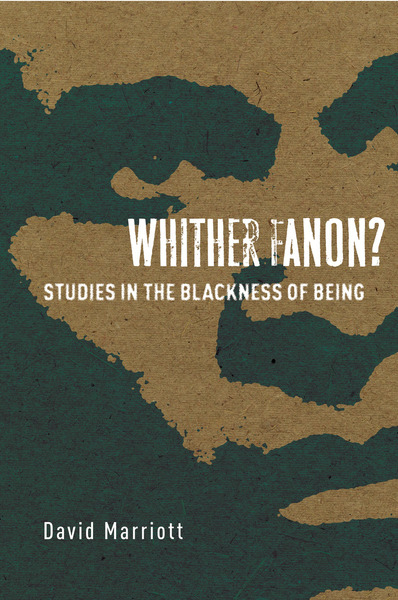 Whither Fanon?
Studies in the Blackness of Being
David Marriott
SERIES: Cultural Memory in the Present

Frantz Fanon may be most known for his more obviously political writings, but in the first instance, he was a clinician, a black Caribbean psychiatrist who had the improbable task of treating disturbed and traumatized North African patients during the wars of decolonization. Investigating and foregrounding the clinical system that Fanon devised in an attempt to intervene against negrophobia and anti-blackness, this book rereads his clinical and political work together, arguing that the two are mutually imbricated. For the first time, Fanon's therapeutic innovations are considered along with his more overtly political and cultural writings to ask how the crises of war affected his practice, informed his politics, and shaped his subsequent ideas. As David Marriott suggests, this combination of the clinical and political involves a psychopolitics that is, by definition, complex, difficult, and perpetually challenging. He details this psychopolitics from two points of view, focusing first on Fanon's sociotherapy, its diagnostic methods and concepts, and second, on Fanon's cultural theory more generally. In our present climate of fear and terror over black presence and the violence to which it gives rise, Whither Fanon? reminds us of Fanon's scandalous actuality and of the continued urgency of his message.

David Marriott is Professor in the History of Consciousness Department at the University of California, Santa Cruz.

"This book is a clarifying event amid recent readings of Fanon and a radical intervention in the conventional ones. Writing with an intensity and momentum unparalleled by other scholars in the field, David Marriott is Frantz Fanon's first reader."

"Whither Fanon? is one of the most original and significant works of theory of this generation. Drawing deeply from Fanon's clinical psychoanalytic work, David Marriott shows in labyrinthine precision how Fanon's colonial racial interiority is both far more unfree than has been imagined and open to an ungrounded revolution without reserve. Perhaps alone among Fanon's readers, Marriott keeps up with Fanon's own complexity, radical negativity, and creative criticality."