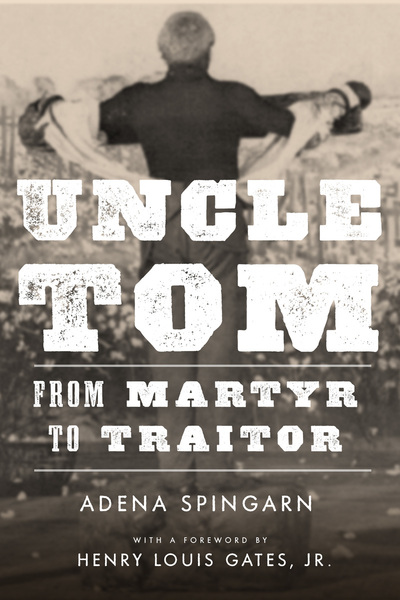 Honorable mention in the 2019 MLA Prize for a First Book, sponsored by the Modern Language Association (MLA).

Uncle Tom charts the dramatic cultural transformation of perhaps the most controversial literary character in American history. From his origins as the heroic, Christ-like protagonist of Harriet Beecher Stowe's anti-slavery novel, the best-selling book of the nineteenth century after the Bible, Uncle Tom has become a widely recognized epithet for a black person deemed so subservient to whites that he betrays his race. Readers have long noted that Stowe's character is not the traitorous sycophant that his name connotes today. Adena Spingarn traces his evolution in the American imagination, offering the first comprehensive account of a figure central to American conversations about race and racial representation from 1852 to the present. We learn of the radical political potential of the novel's many theatrical spinoffs even in the Jim Crow era, Uncle Tom's breezy disavowal by prominent voices of the Harlem Renaissance, and a developing critique of "Uncle Tom roles" in Hollywood. Within the stubborn American binary of black and white, citizens have used this rhetorical figure to debate the boundaries of racial difference and the legacy of slavery. Through Uncle Tom, black Americans have disputed various strategies for racial progress and defined the most desirable and harmful images of black personhood in literature and popular culture.

Adena Spingarn is a writer and scholar of American cultural history who has taught literature at Stanford University and Harvard University. She is currently working on a book on racial censorship in American movies from the silent era to the 1960s.

"Stowe's blockbuster novel continues to provoke debate and touch raw nerves. For Adena Spingarn, it serves as an introduction to the long history of haggling over the meanings of race in America. There are numerous studies of Uncle Tom's Cabin. This is the richest, most provocative, and most stylishly written of the lot."

"Adena Spingarn's grand history of Uncle Tom is both a rich study of the nineteenth-century reception of the novel and a timely analysis of the twentieth-century role of Jim Crow, the myth of the Lost Cause, and the codes of Hollywood in reshaping a major political and cultural symbol. A stirring and revelatory book."

"Spingarn's ambitious volume traces how "Uncle Tom," first seen as a revolutionary exemplar of black dignity and spiritual power, became a potent racial slur....Drawing on her extensive research in digitized archives of periodicals and adaptations of Uncle Tom's Cabin, Spingarn unfolds ambivalent responses to the Uncle Tom figure by both white and African Americans....Essential."

"[Uncle Tom] demonstrates how careful re-reading of contemporary materials can make us rethink the received interpretation of Uncle Tom's Cabin. Spingarn's book is extremely useful for scholars who wish to know how Uncle Tom turned from martyr into traitor and how a new generation of black intellectual leaders reshaped the meaning of an iconic literary character."

"With crisp prose and a broad array of materials that spans representational forms,Uncle Tom: From Martyr to Traitoris necessary reading for anyone interested in how the title character of the most influential work of American literature became so much more than, and so very different from, what his creator could have ever imagined."