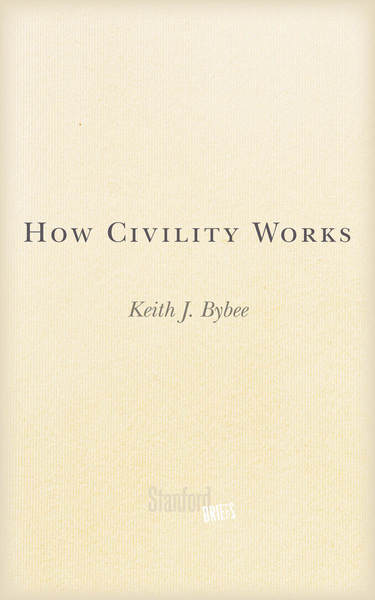 Finalist in the 2017 CNY Book Awards in the non-fiction category, sponsored by the YMCA's Downtown Writers Center .

Is civility dead? Americans ask this question every election season, but their concern is hardly limited to political campaigns. Doubts about civility regularly arise in just about every aspect of American public life. Rudeness runs rampant. Our news media is saturated with aggressive bluster and vitriol. Our digital platforms teem with trolls and expressions of disrespect. Reflecting these conditions, surveys show that a significant majority of Americans believe we are living in an age of unusual anger and discord. Everywhere we look, there seems to be conflict and hostility, with shared respect and consideration nowhere to be found. In a country that encourages thick skins and speaking one's mind, is civility even possible, let alone desirable?

In How Civility Works, Keith J. Bybee elegantly explores the "crisis" in civility, looking closely at how civility intertwines with our long history of boorish behavior and the ongoing quest for pleasant company. Bybee argues that the very features that make civility ineffective and undesirable also point to civility's power and appeal. Can we all get along? If we live by the contradictions on which civility depends, then yes, we can, and yes, we should.

Keith J. Bybee is the Paul E. and the Hon. Joanne F. Alper '72 Judiciary Studies Professor of Law and Professor of Political Science at Syracuse University and their Atlantic Coast Conference (ACC) Distinguished Lecturer for 2016–2017. He is the author of several books, including All Judges Are Political—Except When They Are Not (Stanford, 2010).

"Keith Bybee has delved into the literature of civility and emerged with a clear-eyed and helpful account of politesse. Let us bow."

—Henry Alford, author of Would It Kill You to Stop Doing That? A Modern Guide to Manners

"In an age of Donald Trump, campus 'safe spaces,' unprecedented online bullying, and a rising public conception that 'speaking the truth' is the sole response to 'political correctness,' Keith Bybee's thoughtful meditation on the possibilities of civility is a tonic. For anyone who believes that First Amendment values and human morality need not be on a collision course, and that constraint of our own words is neither hypocrisy nor inauthentic, Bybee begins an important conversation about how our discourse can be moral and robust without sacrificing truth or freedom."

"The current political moment does not exactly exude civility. Appeals to civic aspirations seem quaint, and for now some of us may just need to follow Bybee's advice of 'going along for the sake of getting along.' But eventually we'll have to stop faking it and internalize a genuine desire for civility. The more aspirational sections of How Civility Works intimate how we might get there. And this important book shows us why pursuing that path is as necessary as it is difficult."

WCNY
How should we understand Trump’s ‘uncivil’ behaviour?