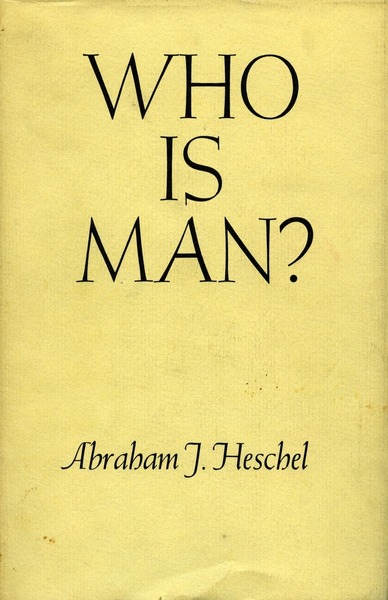 Who Is Man?
Abraham J. Heschel

One of the world’s most illustrious and influential theologians here confronts one of the crucial philosophical and religious questions of our time: the nature and role of man. In these three lectures, originally delivered in somewhat different form as The Raymond Fred West Memorial Lectures at Stanford University in May 1963, Dr. Heschel inquires into the logic of being human: What is meant by being human? What are the grounds on which to justify a human being’s claim to being human?

In the author’s words, “We have never been as openmouthed and inquisitive, never as astonished and embarrassed at our ignorance about man. We know what he makes, but we do not konw wha he is or what to expect of him. Is it not conceivable that our entire civilization is built upon a minsinterpretation of man? Or that the tragedy of man is due to the fact that he is a being who has forgotten the question: Who is Man? The failure to identify himself, to know what is authentic human existence, leads him to assume a false identity, to pretending to be what he is unable to be or to not accepting what is at the very root of his being. Ignorance about man is not lack of knowledge, but false knowledge.”