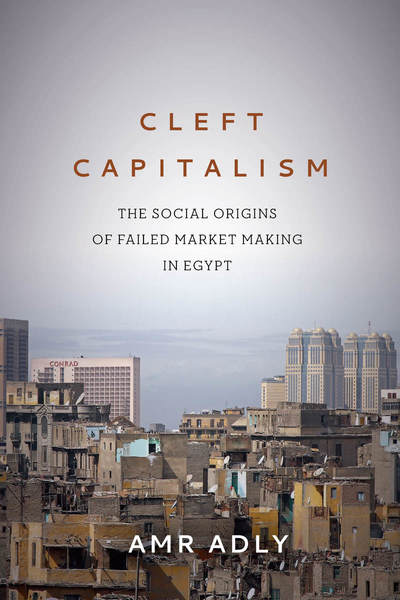 Egypt has undergone significant economic liberalization under the auspices of the International Monetary Fund, the World Bank, USAID, and the European Commission. Yet after more than four decades of economic reform, the Egyptian economy still fails to meet popular expectations for inclusive growth, better standards of living, and high-quality employment. While many analysts point to cronyism and corruption, Amr Adly finds the root causes of this stagnation in the underlying social and political conditions of economic development.

Cleft Capitalism offers a new explanation for why market-based development can fail to meet expectations: small businesses in Egypt are not growing into medium and larger businesses. The practical outcome of this missing middle syndrome is the continuous erosion of the economic and social privileges once enjoyed by the middle classes and unionized labor, without creating enough winners from market making. This in turn set the stage for alienation, discontent, and, finally, revolt. With this book, Adly uncovers both an institutional explanation for Egypt's failed market making, and sheds light on the key factors of arrested economic development across the Global South.

Amr Adly is Assistant Professor of Political Science at the American University in Cairo and the author of State Reform and Development in the Middle East: The Cases of Turkey and Egypt (2012).

"Cleft Capitalism is a highly original analysis of what Amr Adly calls Egypt's 'successful transition to failed capitalism.' Based on extensive and sound research, it represents an important rethinking of the trajectory of Egypt's political economy since 1974 and a bold challenge to Washington Consensus economic policy orthodoxy."

"Amr Adly elaborates a novel explanation for underperforming economies of the Global South. Richly detailed, theoretically insightful, Cleft Capitalism is essential reading for anyone interested in the Egyptian, Middle Eastern, and other political economies."

"Cleft Capitalism offers a lucid, rich, and new understanding of the course of Egyptian economic development. With his sophisticated understanding of Egyptian politics and society and refined economic analysis, Amr Adly not only helps us understand Egypt better, but offers a model of how to approach the contentious terrain of economic change in the developing world."

"Adly puts forth compelling arguments and descriptions of Egypt's failed market making....Cleft Capitalism offers new theoretical insights and valuable empirical analysis of the course of Egypt's political economy and the causes of its economic predicaments since 1974."

"[Cleft Capitalism] is more than an exemplary analysis of the situation of political economy in Egypt. It is also a significant contribution to wider debates on the possibilities and limits of market-based development in the Global South....an essential read to students, researchers, and policy-makers interested in the political economy of Egypt, the limits and potentials of structural adjustment policies, and the insights of economic sociology to the study of political economy."

"Cleft Capitalism is an ambitious book that aims to make broad academic contributions far beyond its specific focus on the contemporary social and political economy of Egypt....[It succeeds] both as an overview of the Egyptian economy and as a critique of the institutional economics orthodoxy. It is one of the best books that I have read about both subjects in recent years, and I recommend it highly."

"[Adly's] novel argument diverges from dominant political economy accounts, which focus on corruption and crony capitalism or the lack of formal property rights and the rule of law. For Adly, the answer lies in the 'missing middle' of small and medium enterprises, which have served an important role in capitalist development by scaling up to become important job creators in more successful developing economies, such as in South Korea. Adly traces the roots of the problem to historically specific institutional arrangements that emerged earlier in the 20th century and during the period of state-led development under Nasser and were consolidated under Sadat and Mubarak's tenures. Adly's book is grounded on impressive qualitative and quantitative data collection and analysis and makes important contributions to the study of failed development in Egypt, with comparative implications for other developing countries in and beyond the Middle East and North Africa."