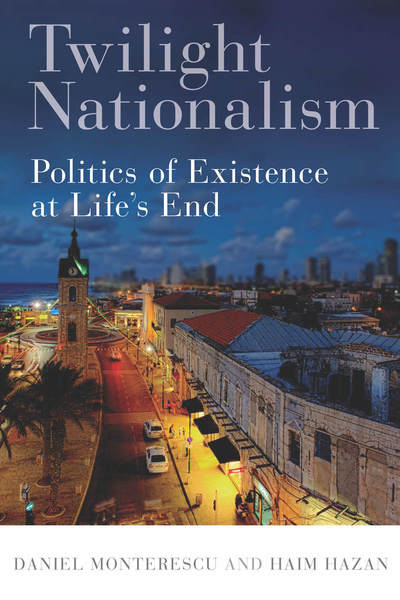 The city of Jaffa presents a paradox: intimate neighbors who are political foes. The official Jewish national tale proceeds from exile to redemption and nation-building, while the Palestinians' is one of a golden age cut short, followed by dispossession and resistance. The experiences of Jaffa's Jewish and Arab residents, however, reveal lives and nationalist sentiments far more complex. Twilight Nationalism shares the stories of ten of the city's elders—women and men, rich and poor, Muslims, Jews, and Christians—to radically deconstruct these national myths and challenge common understandings of belonging and alienation.

Through the stories told at life's end, Daniel Monterescu and Haim Hazan illuminate how national affiliation ultimately gives way to existential circumstances. Similarities in lives prove to be shaped far more by socioeconomic class, age, and gender than national allegiance, and intersections between stories usher in a politics of existence in place of politics of identity. In offering the real stories individuals tell about themselves, this book reveals shared perspectives too long silenced and new understandings of local community previously lost in nationalist narratives.

Daniel Monterescu is Associate Professor of Anthropology at the Central European University and author of Jaffa Shared and Shattered: Contrived Coexistence in Israel/Palestine (2015).

Haim Hazan is Professor of Anthropology at Tel Aviv University and Co-Director of the Minerva Center for the Interdisciplinary Study of the End of Life.

"In Twilight Nationalism, Daniel Monterescu and Haim Hazan go far beyond standard narratives about Jaffa, where Jews, Muslims, and Christians have long shared the city. The authors break through the thicket of established notions and give us an alternative description. And they do so brilliantly."

"Twilight Nationalism gives voice to ten elderly Palestinian survivors and Jewish immigrants from Jaffa who narrate and, indeed, analyze, how the burden of history and the tyranny of the nation fragmented the rhythms of their lives. Daniel Monterescu and Haim Hazan produced a multivocal elegy that is as profound as it is imaginative and nothing short of brilliant."

—Gershon Shafir, University of California, San Diego, author of A Half Century of Occupation: Israel, Palestine, and the World's Most Intractable Conflict

"This groundbreaking book exposes the hidden gems of a binational city, that even indigenous Jaffans like myself tend to overlook."

"InTwilight Nationalism: Politics of Existence at Life's End,authors Daniel Monterescu and Haim Hazan offer an original and thought-provoking ethnographic study of nationalist identity in the "mixed" city of Jaffa...[W]hat their analysis does amply and sensitively show is the value of a relational and situational approach to the study of nationalist identities and discourses, and the importance of being attentive to different social, spatial, and temporal configurations in analyses of their import upon everyday lives."––Una McGahern, H-Nationalism

"One of the strengths of this ethnography is the intimate humanity of the individuals who appear in it...Together, the historical breadth and personal depth of the life histories narrated in this book could offer rich teaching material for students interested in old age, memory, the intersection of identity, politics, and gender, the false dichotomy of collaboration versus resistance, and mixed cities in Israel/ Palestine."––Basma Fahoum, Review of Middle East Studies