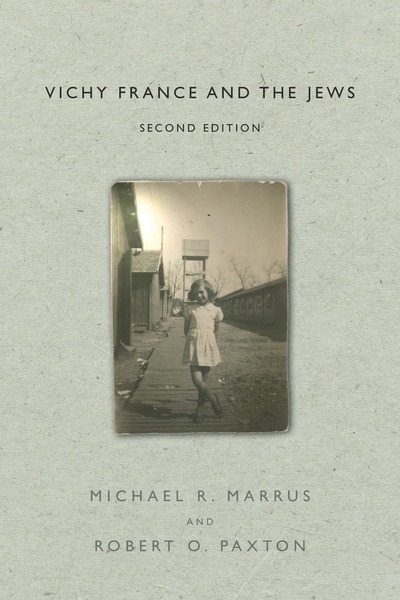 When Vichy France and the Jews was first published in France in 1981, the reaction was explosive. Before the appearance of this groundbreaking book, the question of the Vichy regime's cooperation with the Third Reich had been suppressed. Michael R. Marrus and Robert O. Paxton were the first to access closed archives that revealed the extent of Vichy's complicity in the Nazi effort to eliminate the Jews.

Since the book's original publication, additional archives have been opened, and the role of the French state in the deportation of Jews to the Nazi death factories is now openly acknowledged. This new edition integrates over thirty years of subsequent scholarship, and incorporates research on French public opinion and the diversity of responses by French civilians to the campaign of persecution they witnessed around them. This classic account remains central to the historiography of France and the Holocaust, and in its revised edition, is more important than ever for understanding the Vichy government's role in the darkest atrocity of the twentieth century.

Michael R. Marrus is Professor Emeritus at the University of Toronto. He is the author, most recently, of Lessons of the Holocaust (2015).

Robert O. Paxton is Mellon Professor Emeritus of Social Science at Columbia University and the author of The Anatomy of Fascism (2004), among other titles.

"Marrus and Paxton's Vichy France and the Jews, which radically changed the perspective on an overlooked topic, remains four decades later the best and most complete analysis of Vichy's antisemitic policy. This new updated edition, which has been unanimously acclaimed as a rare achievement in its French version, comes at the right time, when dark times seem to knock at the door of the world."

"Widely acclaimed as the definitive account of Vichy's antisemitic policies and practices, Marrus and Paxton's new edition ofVichy France and the Jews incorporates both the voluminous scholarship and newly available archival materials that have appeared since their first edition. With their thorough revisions, the book maintains its position as the foundational text for anyone interested in this fateful chapter of French history."

—Sarah Fishman, author of From Vichy to the Sexual Revolution: Gender and Family Life in Postwar France

"Those familiar with the original version of this tome published in French in 1981, and later that year in English, will be even more enthusiastic with the second edition since it now includes even more material from the French archives made available to researchers....This is a major contribution."

"In 1981, Marrus and Paxton forever changed the landscape of French and Jewish history with Vichy France and the Jews. In the ensuing years, new research, questions, and archival evidence have built on their foundational work. Highly recommended."

"To re-read Vichy France and the Jews is to remember why it remains the classic text on the Holocaust in France.[In the second edition,] the authors have drawn on scholarly work from the past forty years, allowing them 'to be far more precise' about Vichy's activities.[A] valuable resource for anyone interested in understanding France's wartime anti-Jewish policies."