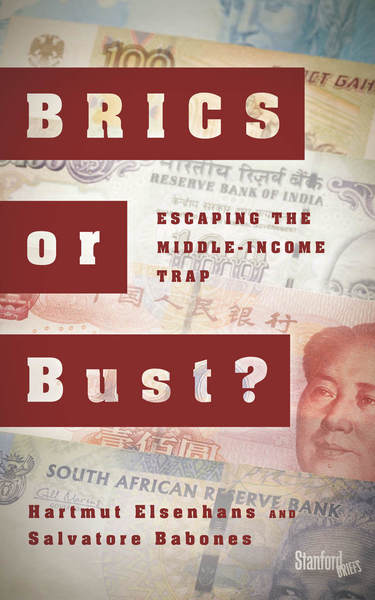 Once among the fastest developing economies, growth has slowed or stalled in Brazil, Russia, India, China, and South Africa. What policies can governments enact to jump-start the rise of these middle-income countries? Hartmut Elsenhans and Salvatore Babones argue that economic catch-up requires investment in the productivity of ordinary citizens.

Diverging from the popular narrative of increased liberalization, this book argues specifically for direct government investment in human infrastructure; policies that increase wages and the bargaining power of labor; and the strategic use of exchange rates to encourage export-led growth. These measures raise up the majority and finance future productivity by driving broader consumption and fostering investment within national borders.

Though strategies like full employment, mass education, and progressive taxation are not especially controversial, none of the BRICS have truly embraced them. Examining barriers to implementation, Elsenhans and Babones find that the main obstacle to such reforms is an absence of political will, stemming from closely guarded elite privilege under the current laws. BRICS or Bust? is a short, incisive read that underscores the need for demand-driven growth and why it has yet to be achieved.

Salvatore Babones is Associate Professor of Sociology at the University of Sydney.

"Elsenhans and Babones critique development orthodoxies with aplomb, providing clear guidance on what can be done at a policy level. The authors' knowledge of relevant theory and debates, brought together with original data, results in an impressive synthesis of argument and evidence."

"Covering a wide range of theory and empirical evidence, this concise, critical survey chronicles the rise of the BRICS and the policy dilemmas that they face. Highly recommended."

—Ray Kiely, Queen Mary University of London, author of The BRICs, US "Decline" and Global Transformations

"This is a wonderful introduction to the critical policy problems facing the BRICS and to the wide-ranging and deeply insightful global political economy of Hartmut Elsenhans, one of the undersung giants in the field."

"This remarkable book provides a practical road map with theoretical underpinnings about how BRICS countries, despite enormous differences in their socio-political systems, can coalesce for the common goal of escaping the 'low or middle income trap.' The intellectual challenge that the authors pose to conventional market-oriented wisdom is a must-consider for concerned economists and politicians."

"This is a well-written book on a very important subject: the BRICS. At times provocative and controversial, it is most interesting and highly readable."

"Are the BRICS caught in the middle-income 'trap,' facing a structural 'barrier' to further development? Through a detailed examination of the recent slowdown in these economies, this book offers a compelling theoretical analysis and a clear, actionable set of policies to overcome the barrier."