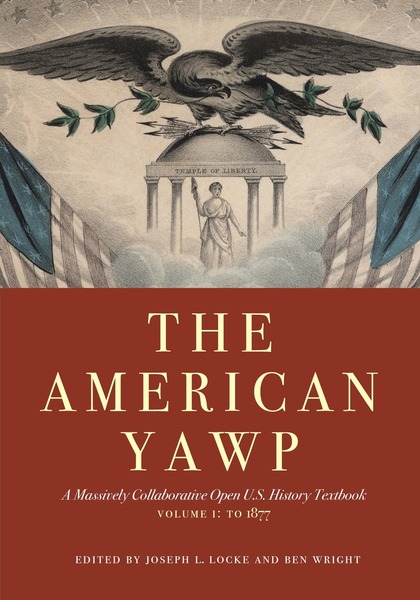 "I too am not a bit tamed—I too am untranslatable / I sound my barbaric yawp over the roofs of the world."—Walt Whitman, "Song of Myself," Leaves of Grass

The American Yawp is a free, online, collaboratively built American history textbook. Over 300 historians joined together to create the book they wanted for their own students—an accessible, synthetic narrative that reflects the best of recent historical scholarship and provides a jumping-off point for discussions in the U.S. history classroom and beyond.

Long before Whitman and long after, Americans have sung something collectively amid the deafening roar of their many individual voices. The Yawp highlights the dynamism and conflict inherent in the history of the United States, while also looking for the common threads that help us make sense of the past. Without losing sight of politics and power, The American Yawp incorporates transnational perspectives, integrates diverse voices, recovers narratives of resistance, and explores the complex process of cultural creation. It looks for America in crowded slave cabins, bustling markets, congested tenements, and marbled halls. It navigates between maternity wards, prisons, streets, bars, and boardrooms.

The fully peer-reviewed edition of The American Yawp will be available in two print volumes designed for the U.S. history survey. Volume I begins with the indigenous people who called the Americas home before chronicling the collision of Native Americans, Europeans, and Africans.The American Yawp traces the development of colonial society in the context of the larger Atlantic World and investigates the origins and ruptures of slavery, the American Revolution, and the new nation's development and rebirth through the Civil War and Reconstruction.

Rather than asserting a fixed narrative of American progress, The American Yawp gives students a starting point for asking their own questions about how the past informs the problems and opportunities that we confront today.

Joseph L. Locke is Assistant Professor of History at the University of Houston-Victoria. He is the author of Making the Bible Belt: Texas Prohibitionists and the Politicization of Southern Religion (2017).

Ben Wright is Assistant Professor of Historical Studies at the University of Texas at Dallas. He is the coeditor of Apocalypse and the Millennium in the American Civil War Era (2013) and abolitionseminar.org, a NEH-funded resource for K–12 teachers. He is also Editor of the Teaching United States History Blog.

"The American Yawp makes it possible for undergraduates to access the best, most recent, and most expansive range of scholarly work currently available. It breaks down boundaries of geography and allows college students to get a real sense of the intellectual cutting-edge. The Yawp is a real contribution."

"Where The American Yawp really stands out from most other textbooks is in the authors' absolute respect for the reader. It's the perfect blend of breadth and depth, and it keeps undergrads and others current on all the latest developments in the historiography. The primary source companion's texts—and the numerous images—challenge students to think more critically, creatively, and expansively."

"As a collaborative historical enterprise, The American Yawp stands out for the breadth of its synthesis, the range of its sources, and the accessibility of its content. Taking inspiration for its title from Whitman, the text travels through the nation's multitudinous history with a verve and variety befitting the poet's free-flowing verse."

"The American Yawp is a minor miracle: a clear, straightforward, accessible, reasonably-priced American history text written by smart, ambitious, young scholars with an eye to the latest research. This survey should put the clunky, expensive books by big names out of business."

"The American Yawp is remarkable not only for how it was put together, with impressive contributions from a diverse assembly of historians, but also by the final result, which is greater than the sum of its parts. Here is a thorough, compelling introduction to American history that can be used in virtually any course, well designed with illustrations and covering the full spectrum of America's communities and cultures."

"The American Yawp is a game changer—a cutting edge survey text that is accessible and engaging. I have used the free and online version for a variety of courses, from surveys to seminars. Students get coverage of essential themes across all of American history without having to pay an exorbitant sum and I get to assign a range of other books and texts on the areas I want to focus on. The American Yawp makes tremendous sense as a course option because its accessibility allows you to give students both options—a survey text and monographs. The images, documents and extra material add further value. But the real deal is the text itself, which offers up-to-date coverage of a host of themes and topics and allows students to get both context and depth. The editors should be proud. Finally a textbook for the digital age!"