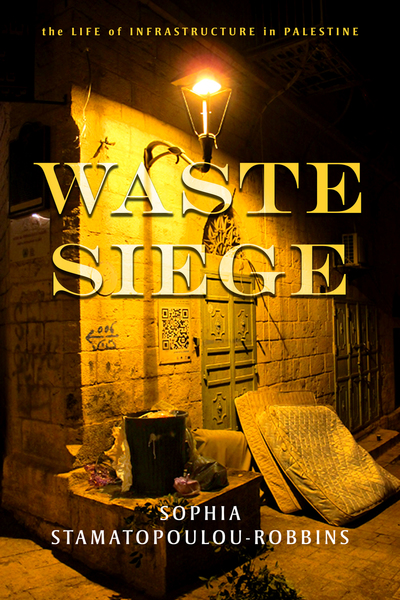 Joint Winner of the the 2021 Sharon Stephens Book Prize, sponsored by the American Ethnological Society.

Winner of the 2021 Julian Steward Award, sponsored by the American Anthropological Association (AAA) - Anthropology and the Environment Section.

Waste Siege offers an analysis unusual in the study of Palestine: it depicts the environmental, infrastructural, and aesthetic context in which Palestinians are obliged to forge their lives. To speak of waste siege is to describe a series of conditions, from smelling wastes to negotiating military infrastructures, from biopolitical forms of colonial rule to experiences of governmental abandonment, from obvious targets of resistance to confusion over responsibility for the burdensome objects of daily life. Within this rubble, debris, and infrastructural fallout, West Bank Palestinians create a life under settler colonial rule.

Sophia Stamatopoulou-Robbins focuses on waste as an experience of everyday life that is continuous with, but not a result only of, occupation. Tracing Palestinians' own experiences of wastes over the past decade, she considers how multiple authorities governing the West Bank—including municipalities, the Palestinian Authority, international aid organizations, NGOs, and Israel—rule by waste siege, whether intentionally or not. Her work challenges both common formulations of waste as "matter out of place" and as the ontological opposite of the environment, by suggesting instead that waste siege be understood as an ecology of "matter with no place to go." Waste siege thus not only describes a stateless Palestine, but also becomes a metaphor for our besieged planet.

Sophia Stamatopoulou-Robbins is Assistant Professor of Anthropology at Bard College.

"There are so many reasons to read this book: it's brilliantly written, theoretically innovative, and politically necessary. Waste Siege is not only one of the most original accounts of waste to date, it is essential reading for anyone hoping to understand the ongoing occupation of the West Bank from the perspective of ordinary Palestinians."

—Joshua Reno, author of Waste Away: Working and Living with a North American Landfill

"Waste Siege is an original and innovative account of living with the inundation of debris and toxicity in Palestine. Taking the reader on a journey through landfills and rubbish markets, encounters with bags of bread left hanging on the sides of dumpsters, and the movement of sewage across political barriers, Sophia Stamatopoulou-Robbins brilliantly excavates the ambient politics of waste and its management."

"[An] insightful, penetrating account of life under six decades of military occupation for the nearly three million Palestinians....In this well-written, intelligent account based on firsthand ethnographic fieldwork, the author displays a keen understanding of both waste ecology and contemporary life in occupied Palestine. Highly recommended."

"Although Sophia Stamatopoulou-Robbins' marvelous new book is about waste management in Palestine, it asks extremely timely and relevant questions about the putative universality of environmental threats, mobility, fixity, political violence, and state governance."

"Waste Siege is a welcome addition to the sparse literature about the environment, waste, and infrastructure in Palestine and the Middle East more broadly.[An] important work."

"By tracing the flows and forces of waste siege, this text enables a more refined understanding of the socio-political worlds forged with, under, and against occupation....In Stamatopoulou-Robbins's ethnography, environment, occupation, and everyday life are grasped in a single frame."

"Through a careful sifting of the various sites at which waste from Israel threatens to overwhelm physical settings and the ordinary lives of Palestinians, Stamatopoulou-Robbins leads us to appreciate the structural impossibility of Palestinian self-government as a rejoinder to utopian fantasies of a two-state solution. The tracing of the afterlives of bread in the midst of the hurly burly of urban lives and waste management projects, incomplete of necessity, suggests alternative geographies of food infrastructure and mutual aid. We are treated to people who are fully fleshed-out and multi-dimensional and whose voices of rueful honesty, of humor mixed with anguish, continue to ring in our ears long after we put down the book. A community under siege is connected to the rest of the world by waste."

"Stamatopoulou-Robbins provides a visceral and theoretically sophisticated guide to the disposability, toxicity, and ethical dilemmas that Palestinians confront in the West Bank today.Grounded in the anthropology of waste, the state, the environment, and infrastructure,Waste Siegeis a theoretically rich, ethnographically grounded, beautifully written exploration of the 'kind of living we do in the constantly changing ruins we have made.'"

"Waste Siege is a captivating book on the impact of the global inundation of waste, and waste infrastructure, on the lives of Palestinians. In a sense, Stamatopoulou-Robbins carves out the constellation surrounding waste, and in a bigger picture, a global economy of inundation... This book is a fantastic read for anyone interested in the lives of Palestinians under occupation from a refreshing perspective on the nation, and the nation-state. It is a wonderful analysis of Palestinian statehood and the ensuing debate on the Authority's success as a governing body."

"Stamatopoulou-Robbins's interviews are a particular strength of Waste Siege. Some of her interlocutors are the men of the rabish and the consumers of second-hand goods who tell a story about garbage intertwined with the issues of class and views of the other, all set within the sprawling networks of flea markets."

"Waste Siegeis a brilliant and insightful ethnography into the West Bank's inundation of waste dumped from Israel, Israeli settlements, and Palestinian cities. Stamatopoulou-Robbins does not just focus on what the Israeli military does to the Palestinians, but the role Palestinian political parties, bureaucrats, humanitarian NGOs, and the international community play in the slow degradation of Palestinian life through waste."

"From a variety of vantage points, Waste Siege sheds light on how people negotiate being overdetermined by their colonial conditions, including through their deployment and rejection of the term (and the terms of their) environment."

"Ambitious in scope, Waste Siege balances historical analysis and thick ethnographic description to offer novel readings of patterned phenomena under Israeli occupation, and to Stamatopoulou-Robbins' credit, the book defies categorization. ... As Israel continues its project of ethnic cleansing in historical Palestine and as capitalism accelerates environmental calamity across the globe, Stamatopoulou-Robbins' contribution is a refreshing reminder of the political work that remains possible within academia."

An Interview with Sophia Stamatopoulou-Robbins