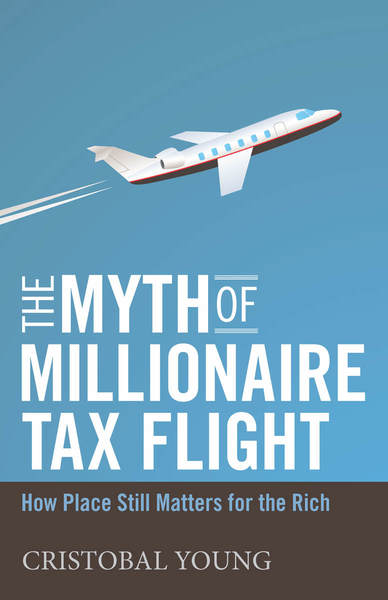 The Myth of Millionaire Tax Flight
How Place Still Matters for the Rich
Cristobal Young
SERIES: Studies in Social Inequality

In this age of globalization, many countries and U.S. states are worried about the tax flight of the rich. As income inequality grows and U.S. states consider raising taxes on their wealthiest residents, there is a palpable concern that these high rollers will board their private jets and fly away, taking their wealth with them. Many assume that the importance of location to a person's success is at an all-time low. Cristobal Young, however, makes the surprising argument that location is very important to the world's richest people. Frequently, he says, place has a great deal to do with how they make their millions.

In The Myth of Millionaire Tax Flight, Young examines a trove of data on millionaires and billionaires—confidential tax returns, Forbes lists, and census records—and distills down surprising insights. While economic elites have the resources and capacity to flee high-tax places, their actual migration is surprisingly limited. For the rich, ongoing economic potential is tied to the place where they become successful—often where they are powerful insiders—and that success ultimately diminishes both the incentive and desire to migrate.

This important book debunks a powerful idea that has driven fiscal policy for years, and in doing so it clears the way for a new era. Millionaire taxes, Young argues, could give states the funds to pay for infrastructure, education, and other social programs to attract a group of people who are much more mobile—the younger generation.

Cristobal Young is Assistant Professor of Sociology at Stanford University. He studies how sociological dynamics shape the effects of public policies—especially policies meant to reduce inequality. His research has been featured in The Wall Street Journal, The New York Times, and USA Today, and he has contributed pieces to The New York Times Sunday Review and the New York Daily News, among others.

"Young debunks the widely-held myth that raising taxes on the wealthy inevitably prompts their out-migration and ultimately reduces tax revenue. His sophisticated analysis convincingly demonstrates the opposite. This is a tour-de-force that should be read by policymakers and taxpayers everywhere."

"Whether taxing millionaires will cause them to flee is an important policy issue dominated by unsupported rhetoric. This clearly written and carefully researched book sheds new light on the question by looking soberly at the facts while exposing popular views as myths."

"Young reveals the extent to which much political rhetoric around taxes and the rich rests on unfounded anecdotal assumptions. [The Myth of Millionaire Tax Flight] is an important book which contributes much to political and economic sociology, as well as the growing field of fiscal sociology. It is written in a non-technical prose, making it also accessible for policymakers and non-scholarly audiences alike. In a moment of increasing inequality and near permanent austerity, Young's analysis will hopefully inspire more research on the wealthy and taxes."