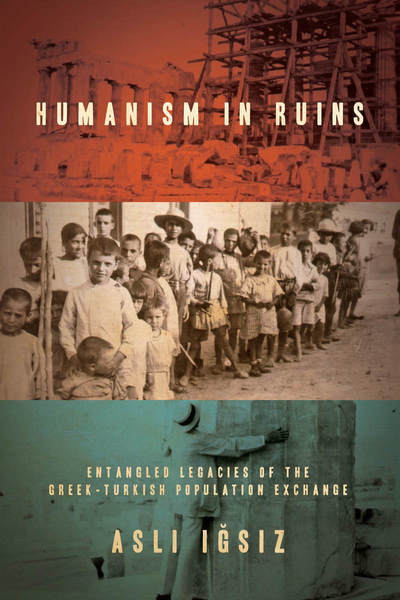 The 1923 Greek-Turkish population exchange forcibly relocated one and a half million people: Muslims in Greece were resettled in Turkey, and Greek Orthodox Christians in Turkey were moved to Greece. This landmark event set a legal precedent for population management on the basis of religious or ethnic difference. Similar segregative policies—such as creating walls, partitions, and apartheids—have followed in its wake. Strikingly, the exchange was purportedly enacted as a means to achieve peace.

Humanism in Ruins maps the links between liberal discourses on peace and the legacies of this forced migration. Aslı Iğsız weaves together past and present, making visible the effects in Turkey across the ensuing century, of the 1923 exchange. Liberal humanism has responded to segregative policies by calling for coexistence and the acceptance of cultural diversity. Yet, as Iğsız makes clear, liberal humanism itself, with its ahistorical emphasis on a shared humanity, fails to confront an underlying racialized logic. This far-reaching and multilayered cultural history investigates what it means to be human—historically, socially, and politically. It delivers an urgent message about the politics of difference at a time when the reincarnation of fascism in different parts of the world invites citizens to participate in perpetuating a racialized and unequal world.

"Aslı Iğsız offers original and creative insight into the aftermath of the 1923 population exchange. A superb genealogy of cultural policy and the politics of culture in Turkey."

"Humanism in Ruins incisively reveals how liberal discourses of peace and tolerance have been entangled with the racialization of social difference. An impressive contribution to the critical study of liberalism in the Middle East."

"At the start of 2019, almost eighty million people were displaced by war or violent conflict. It is virtually certain that mass population movements will continue, and it is clear that there is a pressing need to change the terms of the international debate and policy regarding the issue. This reality deems Aslı Iğsız's insightful book, Humanism in Ruins, to be not only timely but also an essential read."––Elektra Kostopoulou, Jadaliyya

"[An] original and necessary work....At the center of Iğsız's virtuoso argument here is the suggestion that the liberal humanism that has established the global order of the twentieth and twenty-first centuries is built upon a ruinous foundation: "the policies of biopolitics"....intellectually, politically, and in every other sense, a truly courageous book."––Anthony Alessandrini, Jadaliyya

"Iğsız's work is...unique in tracing the foundational imprint historicist humanism has made on liberal humanism....As we see the segregative logic of walls and fortresses emerging anew, as a response to the largest refugee crisis to occur since World War II, attending to the complex and contradictory histories and effects of existing humanitarian regimes takes on great urgency."––Esra Özyürek, Political and Legal Anthropology Review

"[Humanism in Ruins] is the latest addition to the growing literature of critical analysis of the Greek-Turkish population exchange and without a doubt debunks the myth that it was a win-win solution and a clear achievement once and for all....Each part is strong enough to be a stand-alone treatise and an invitation for engaged and committed practices of cultural analysis."

"Iğsız's perceptive analysis shows how arguments both for and against diversity are in fact informed by biopolitics. Her study thus presents a unique vantage point for an examination of the limits of the key notions of liberal cultural policies....Humanism in Ruins is an excellent and complex analysis of the racist legacies of population exchanges in modern-day cultural policies."

"Humanism in Ruins is a brilliant, path-breaking book....Igsiz makes major interventions into debates on liberalism, culture, and politics. And for those who have been decrying the paucity of works on race in Middle East studies, this book is a very welcome addition....There is much to digest in this fascinating and highly original work, so much that it is hard to do justice to it in a short review."

"Humanism in Ruins is a stimulating and well-structured book.[It] manages to move successfully through a great variety of material, historical and theoretical, and offers a fruitful contribution in the field of migration studies."

Jadaliyya
More in History—Intellectual and Cultural