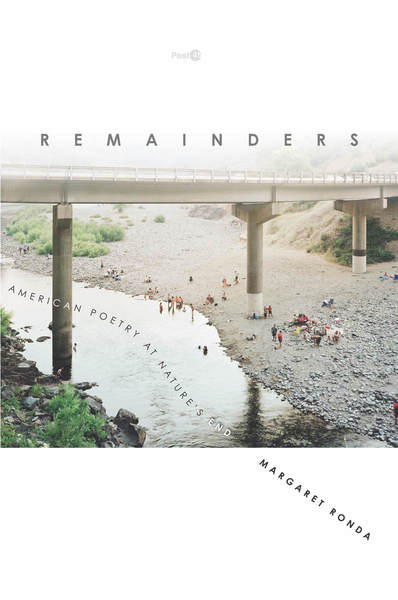 A literary history of the Great Acceleration, Remainders examines an archive of postwar American poetry that reflects on new dimensions of ecological crisis. These poems portray various forms of remainders—from obsolescent goods and waste products to atmospheric pollution and melting glaciers—that convey the ecological consequences of global economic development. While North American ecocriticism has tended to focus on narrative forms in its investigations of environmental consciousness and ethics, Margaret Ronda highlights the ways that poetry explores other dimensions of ecological relationships. The poems she considers engage in more ambivalent ways with the problem of human agency and the limits of individual perception, and they are attuned to the melancholic and damaging aspects of environmental existence in a time of generalized crisis. Her method, which emphasizes the material histories and uneven effects of capitalist development, models a unique critical approach to understanding the causes and conditions of ongoing biospheric catastrophe.

Margaret Ronda is Assistant Professor of English at the University of California, Davis. Her collection of poetry, Personification, was the winner of the 2009 Saturnalia Books Poetry Prize.

"This haunting and deftly executed book tracks the traces and effects of postwar consumption-driven capitalism in American poetry in unexpected ways. Margaret Ronda proves to be an ecocritical scholar of keen poetic insight, originality, and range."

"With precise and unsparing attention, Remainders shows us how the very things that make poetry 'untimely'—bearing old forms into the present, making present the discarded or lost, investing in barely conceivable futures—can make it the timeliest of arts, best attuned to the ecological calamity of our era."

"Margaret Ronda makes a persuasive case for poetry's continued relevance as a response to the ecological outrages of late capitalist development. Remainders sheds light on a literary tradition whose exegetical, affective, and political intractability reflects the planetary crisis that surrounds us, while rejecting any facile narrative of repair. This is a timely book about the radical possibilities of untimeliness."

"Ronda's expansive rubric of the remainder has the advantage of accentuating the ecological resonance of poems by figures not traditionally situated within ecological circles...Ronda's precise interpretations, above all else, dazzle."

"Twentieth-century and contemporary US poets, Ronda shows, have a vivid sense of the human predicament and the consequences of anthropogenic climate change, which they register and route through the remainders of poetic traditions....[She leads] readers through extended, difficult, and detailed readings of literary texts, but[attaches] these readings to intuitive research questions about poetry's place in the world."

"Ronda lucidly articulates and examines...changing paradigms, and the histories which provoked them, under the heading 'the Great Acceleration', which encompasses the huge raft of changes to the post-1945 world....Moreover, she forcefully conceptualizes the specifics of this history as part of late capitalism's seemingly inexorable spread."

—Stephen Grace, The Year's Work in Critical and Cultural Theory

"Ronda's book is an important contribution to ecocriticism and poetry studies in these grim times, and most likely it will remain so for years to come."

"Ronda's contribution forges a conceptual tool for tracking what Theodor Adorno and Walter Benjamin collaboratively theorize as natural history.[Her] book offers literary history and environmentalism each a new path for considering what remains."

"[T]he source of this book's real value [is] a reinvention of the radical register of thought and action for our historical present – because nothing less will be sufficient if we are to survive the storms to come."