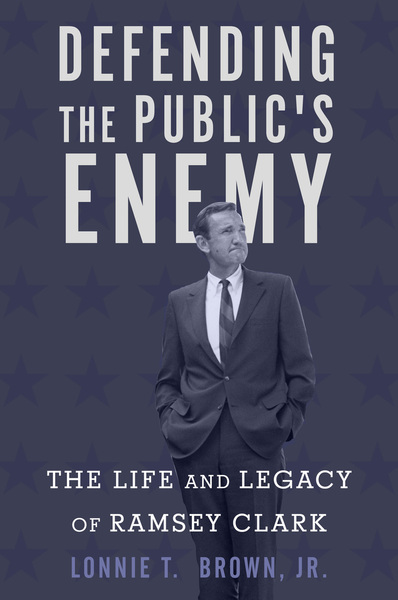 What led a former United States Attorney General to become one of the world's most notorious defenders of the despised? Defending the Public's Enemy examines Clark's enigmatic life and career in a quest to answer this perplexing question.

The culmination of ten years of research and interviews, Lonnie T. Brown, Jr. explores how Clark evolved from our government's chief lawyer to a strident advocate for some of America's most vilified enemies. Clark's early career was enmeshed with seminally important people and events of the 1960s: Martin Luther King, Jr., Watts Riots, Selma-to-Montgomery March, Black Panthers, Vietnam. As a government insider, he worked to secure the civil rights of black Americans, resisting persistent, racist calls for more law and order. However, upon entering the private sector, Clark seemingly changed, morphing into the government's adversary by aligning with a mystifying array of demonized clients—among them, alleged terrorists, reputed Nazi war criminals, and brutal dictators, including Saddam Hussein.

Is Clark a man of character and integrity, committed to ensuring his government's adherence to the ideals of justice and fairness, or is he a professional antagonist, anti-American and reflexively contrarian to the core? The provocative life chronicled in Defending the Public's Enemy is emblematic of the contradictions at the heart of American political history, and society's ambivalent relationship with dissenters and outliers, as well as those who defend them.

Lonnie T. Brown, Jr. is the A. Gus Cleveland Distinguished Chair of Legal Ethics and Professionalism at the University of Georgia School of Law. He specializes in legal ethics and civil procedure, and speaks and publishes widely in the area of legal ethics in the adversary process.

"Ramsey Clark is at once an important participant in the major events of the past 60-plus years of American and world history, particularly relating to civil and human rights, and a lawyer whose professional career is among the most interesting and impactful. Brown's book is both a fascinating account of the man and lawyer and a captivating lens through which to see a connection among important events in contemporary history."

"In this captivating biography, Lonnie T. Brown offers an intimate window into Ramsey Clark's controversial career as it intersected and shaped twentieth-century political and legal history, and challenges how we understand the role of lawyers in a democratic society."

"Evolving from one of the most accomplished public lawyers of his time to perhaps the most vilified, Ramsey Clark has been an important and controversial participant in nearly every important American public debate, from civil rights to the post-9/11 world. In this sympathetic, personal account, Lonnie T. Brown, Jr. strikes a balance between Clark's defenders and his critics. Clark will continue to inspire passionate disagreement, but this is the best account we have of the career of this important public figure."

—Kenneth W. Mack, author of Representing the Race: The Creation of the Civil Rights Lawyer

"Lonnie T. Brown Jr.'s biography of the remarkable Ramsey Clark is careful, thorough, and insightful. It is an important contribution to the history of American lawyering."

"Ramsey Clark is an unsung hero of the civil rights movement. Through extensive interviews with Clark, Lonnie T. Brown, Jr. deepens the portrait of one of the most complex figures in twentieth-century American history. Spanning Clark's career as a lawyer and public servant from the 1960's civil rights and anti-war protests through the trial of Saddam Hussein, this fascinating book reveals a 'sophisticated yet shadowy Forrest Gump' indeed."

"In this biography of Clark, author Lonnie T. Brown skillfully leads us through his subject's life and career, giving us clues as to why Clark turned into such an unyielding critic of his country."