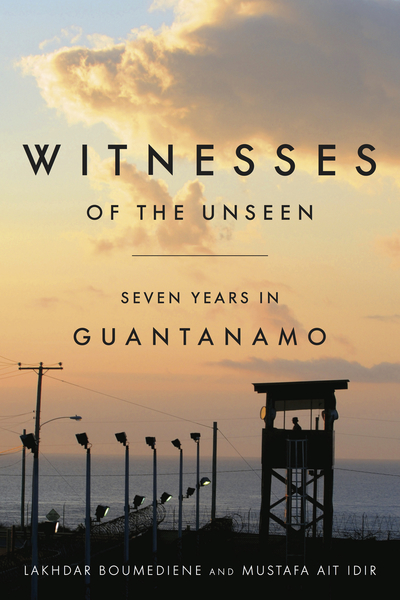 Honorable Mention in the 2018 PROSE Award in the category of Biography & Autobiography, sponsored by the Professional and Scholarly Publishing Division, Association of American Publishers.

This searing memoir shares the trauma and triumphs of Lakhdar Boumediene and Mustafa Ait Idir's time inside America's most notorious prison.

Lakhdar and Mustafa were living quiet, peaceful lives in Bosnia when, in October 2001, they were arrested and accused of participating in a terrorist plot. After a three-month investigation uncovered no evidence, all charges were dropped and Bosnian courts ordered their freedom. However, under intense U.S. pressure, Bosnian officials turned them over to American soldiers. They were flown blindfolded and shackled to Guantanamo Bay, Cuba, where they were held in outdoor cages for weeks as the now-infamous military prison was built around them.

Guantanamo became their home for the next seven years. They endured torture and harassment and force-feedings and beatings, all the while not knowing if they would ever see their families again. They had no opportunity to argue their innocence until 2008, when the Supreme Court issued a landmark ruling in their case, Boumediene v. Bush, confirming Guantanamo detainees' constitutional right to challenge their detention in federal court. Weeks later, the George W. Bush–appointed federal judge who heard their case, stunned by the absence of evidence against them, ordered their release. Now living in Europe and rebuilding their lives, Lakhdar and Mustafa are finally free to share a story that every American ought to know.

Learn more at witnessesbook.com or donate to a crowdsourced restitution fund at GoFundMe.com/witnesses.

Lakhdar Boumediene was the lead plaintiff in the Supreme Court case Boumediene v. Bush. Prior to his seven-year internment in Guantanamo Bay, he was an aid worker for the Red Crescent Society in Bosnia. He now lives in France with his wife and children.

Mustafa Ait Idir, a co-plaintiff in Boumediene v. Bush, was also held in Guantanamo Bay for seven years. Before his internment, he worked for Qatar Charities in Bosnia and was widely recognized as a talented athlete and coach. He has reunited with his wife and children and is now a computer science teacher at a secondary school in Sarajevo.

Lakhdar and Mustafa shared their stories with Kathleen List, who helped translate them from Arabic into English. Daniel Hartnett Norland and Jeffrey Rose edited their accounts.

"The U.S. government didn't want you to hear about life in the 'legal black hole' of Guantanamo. Having won the right to a judicial hearing and secured their release, Lakhdar Boumediene and Mustafa Ait Idir tell the urgent, compelling story behind their detention and one of the most important Supreme Court decisions of this century. It's a revealing and moving look at what the U.S. government tried desperately to hide."

"Lakhdar Boumediene and Mustafa Ait Idir are two of the most notorious victims of the U.S.'s post-9/11 program of rendition, torture, and indefinite detention. Kidnapped on groundless suspicions, they are perfectly placed to reflect on the horrors of Guantanamo and the 'war on terror.' With a warmth and intelligence sadly lacking in America's treatment of them, this powerful joint memoir exposes their captors' cruelty and the Kafkaesque twists and turns of the U.S. government's efforts to build a case against them."

—Andy Worthington, author of The Guantánamo Files: The Stories of the 774 Detainees in America's Illegal Prison

"Witnesses of the Unseen courageously exposes an ugly episode in U.S. history, restoring to Lakhdar Boumediene and Mustafa Ait Idir the humanity hijacked from them by the American government. This book transcends geography and time to take readers from Boumediene and Ait Idir's early years of innocence to their long imprisonment in the cages of Guantanamo. A must read for all people of conscience."

"This no-frills account of their time in Guantánamo is disturbing, as the authors detail their mistreatment at the hands of prison guards and interrogators and how they were held in outdoor cages as the prison was built around them. Readers will be shocked by the lack of evidence against the men and how the tenuous ties among a group of casual friends fueled the government's crusade against them. An intense, important read for anyone interested in the American government's misguided efforts at Guantánamo. "

"This book gives us insight into a dark period of U.S. history that is bound to repeat itself, unless more people like Mustafa and Lakhdar agree to tell their stories. Through their compelling first person accounts, told with enormous sensitivity, we learn how a culture of fear and suspicion can result in cruelty, injustice, and total disregard for humanity. There is horror, but there is also immense hope in this world where dedicated people, including the victims who have suffered untold indignities, speak up and speak out."

"In Guantanamo, Mustafa and Lakhdar often lifted my spirits and gave me reasons to smile and to laugh in the midst of so much pain and darkness. I urge everyone to read this moment of history, which is so beautifully and graciously captured by my two brothers and friends."

"This book is crucial reading for all Americans. From a faculty perspective, it is invaluable to students in a number of disciplines: political science, criminal justice, and public administration are ones that come readily to mind because of the constitutional issues raised. At its most basic, this book offers two compelling and disturbingly similar accounts of former Guantanamo detainees Lakhdar Boumediene and Mustafa Ait Idir about their imprisonment in the notorious gulag over seven years...This book would be an excellent resource for exploring issues of ethics, checks and balances, and other issues. Highly recommended"

"There is much that shocks the conscience in Mr. Boumediene and Mr. Idir's book, even to those of us who have read nearly everything about Guantanamo in the 16 long years since it opened. Their resilience, and continuing recovery from the brutal treatment meted out by the United States government, is deeply moving."

Witnesses of the Unseen

USA Today
“I Want Americans to Know That Guantánamo Happened Not to Monsters, but to Men”

Mother Jones
I Was Force-Fed at Guantanamo. What Guards Are Doing Now Is Worse.