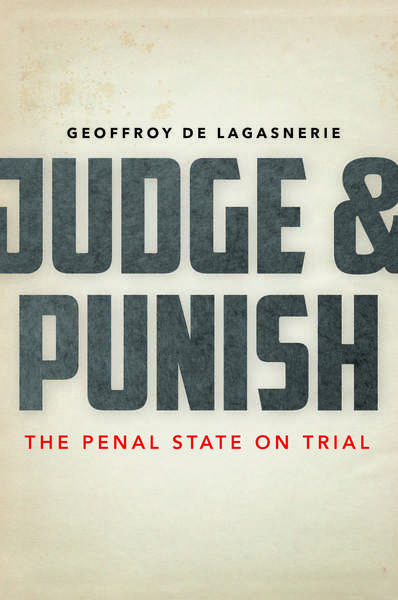 What remains anti-democratic in our criminal justice systems, and where does it come from? Geoffroy de Lagasnerie spent years sitting in on trials, watching as individuals were judged and sentenced for armed robbery, assault, rape, and murder. His experience led to this original reflection on the penal state, power, and violence that identifies a paradox in the way justice is exercised in liberal democracies. In order to pronounce a judgment, a trial must construct an individualizing story of actors and their acts; but in order to punish, each act between individuals must be transformed into an aggression against society as a whole, against the state itself.

The law is often presented as the reign of reason over passion. Instead, it leads to trauma, dispossession, and violence. Only by overturning our inherited legal fictions can we envision forms of truer justice. Combining narratives of real trials with theoretical analysis, Judge and Punish shows that juridical institutions are not merely a response to crime. The state claims to guarantee our security, yet from our birth, we also belong to it. The criminal trial, a magnifying mirror, reveals our true condition as political subjects.

Geoffroy de Lagasnerie is a Professor of Philosophy and Sociology at the École Nationale Supérieure d'Arts de Paris-Cergy and the author of The Art of Revolt (Stanford, 2017).

"Lagasnerie opens up possibilities for us to think differently: to escape from the force of current certainties and conventions and to re-envision the stakes of debates about justice, responsibility, crime, and punishment. The revolution he proposes is mental, with neither redistribution of wealth or regime change as prerequisites, but it remains radical. Destabilizing and anti-institutional, this is an important book; its sharp attacks on academic social science and 'expertise' will surely spark reaction, attack, and debate, and with good reason."

"Using practical insights gained over years of observing court cases in Paris, Geoffroy de Lagasnerie elaborates a critical reflection on power, violence, and the penal state. In clear and accessible language, his book makes an original and thought-provoking contribution to our understanding of the judicial system in Western democracies."

"This detailed examination of state penal logic provides a trenchant counteroffensive in both language and practice. Along with a critical retooling of sociological inquiry, this groundbreaking work offers an exploration of justice as an institution. Judge and Punish asks the big, penetrating questions that will shape the future of justice systems throughout the Western world."

"Departing from venerable theoretical frameworks for comprehending the penal state and its actions, Geoffroy de Lagasnerie observes the contemporary criminal trial as a very different kind of drama, one centered on the violent relationship between the state and those who cannot escape it. A bracing combination of social theory and empirical observation."