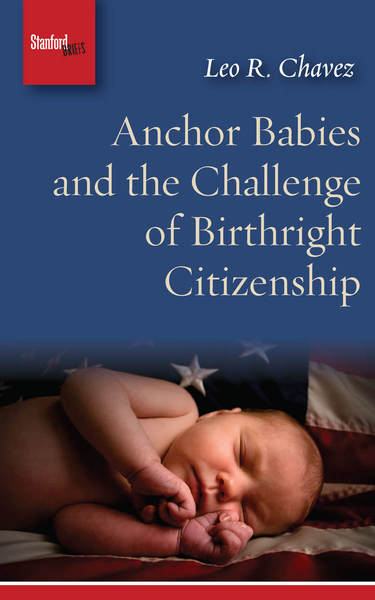 Birthright citizenship has a deep and contentious history in the United States, one often hard to square in a country that prides itself on being "a nation of immigrants." Even as the question of citizenship for children of immigrants was seemingly settled by the Fourteenth Amendment, vitriolic debate has continued for well over a century, especially in relation to U.S. race relations. Most recently, a provocative and decidedly more offensive term than birthright citizenship has emerged: "anchor babies."

With this book, Leo R. Chavez explores the question of birthright citizenship, and of citizenship in the United States writ broadly, as he counters the often hyperbolic claims surrounding these so-called anchor babies. Chavez considers how the term is used as a political dog whistle, how changes in the legal definition of citizenship have affected the children of immigrants over time, and, ultimately, how U.S.-born citizens still experience trauma if they live in families with undocumented immigrants. By examining this pejorative term in its political, historical, and social contexts, Chavez calls upon us to exorcise it from public discourse and work toward building a more inclusive nation.

Leo R. Chavez is Professor of Anthropology at the University of California, Irvine. He is the author of The Latino Threat: Constructing Immigrants, Citizens, and the Nation (Stanford, 2008, 2013), among other books.

"Leo Chavez establishes two important truths with Anchor Babies and the Challenge of Birthright Citizenship: he reinforces the historical and continuing importance of 'citizenship' in defining our nation's character, and he documents the very real and significant impacts on children and families in how we talk about citizenship and how we seek to limit its availability. These are critical lessons for all who participate in policy debates today in America."

"This very readable book makes an enormously important contribution to the immigration debate. Leo Chavez carefully examines the history, rhetoric, and law of why those born in the United States are rightly accorded citizenship. Anchor Babies and the Challenge of Birthright Citizenship is a must-read for all future discussions about U.S. citizenship."

—Erwin Chemerinsky, author of The Conservative Assault on the Constitution

"Leo Chavez has written a timely and compelling book that poses some of the most critical questions about citizenship and deservingness facing our nation today. Anchor Babies and the Challenge of Birthright Citizenship illuminates the human costs of drawing bright lines that exclude those born on U.S. soil—forced family separation, economic hardship, broken spirits, and a fractured nation. Analytically sharp, powerfully written, and cogently argued, this important book is essential reading for every American."

—Roberto G. Gonzales, author of Lives in Limbo: Undocumented and Coming of Age in America