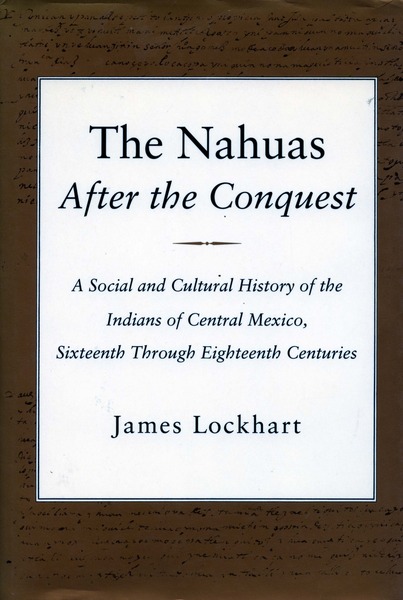 The Nahuas After the Conquest
A Social and Cultural History of the Indians of Central Mexico, Sixteenth Through Eighteenth Centuries
James Lockhart

Winner of the 1993 Albert J. Beveridge Prize, sponsored by the American Historical Association.

Winner of the 1993 Erminie Wheeler-Voegelin Prize, sponsored by the American Society for Ethnohistory.

Winner of the 1993 Howard Francis Cline Memorial Prize, sponsored by the Conference on Latin American History.

A monumental achievement of scholarship, this volume on the Nahua Indians of Central Mexico (often called Aztecs) constitutes our best understanding of any New World indigenous society in the period following European contact.

Simply put, the purpose of this book is to throw light on the history of Nahua society and culture through the use of records in Nahuatl, concentrating on the time when the bulk of the extant documents were written, between about 1540-50 and the late eighteenth century. At the same time, the earliest records are full of implications for the very first years after contact, and ultimately for the preconquest epoch as well, both of which are touched on here in ways that are more than introductory or ancillary.

"This book deserves to be recognized for what it is, as a landmark in the study of the adaptation of the Nahuatl-speaking people, who made up most of the population of Central Mexico, to Spanish rule. But, more than this, it is also a classic study in the history of the cultural encounter of European and non-European."

"Lockhart has created an instant classic of the ethnohistorical and broader colonial literature. Its encyclopedic breadth . . . and its deep, reverential empiricism almost bludgeon the reader into an awesome respect for the author's masterful scholarship."

"A magnificent scholarly achievement. Incomparably the best study of post-conquest New World indigenous society, it is destined to become an indispensable cornerstone for students of the field."