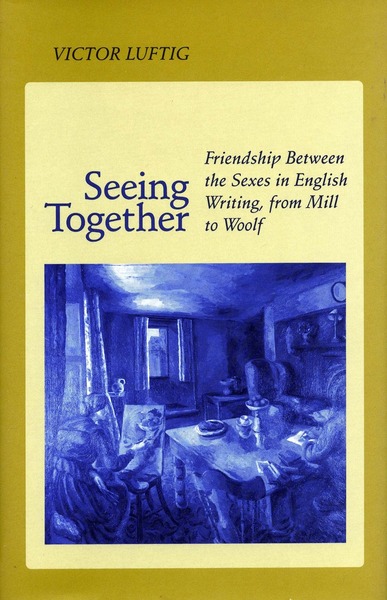 Friendship between the sexes is notoriously difficult to describe. Seeing Together examines the efforts of some of England's key writers - from poets to propagandists - during a period when 'mere friendship' came to seem intensely important and when discussion of professional relations between men and women came to touch upon a troubling network of sexual, social and political dynamics. Among the authors discussed are John Stuart Mill, Robert Browning, George Eliot, Thomas Hardy, Henry James, Joseph Conrad, D. H. Lawrence and Virginia Woolf.

"This consistently intelligent study of friendship in late Victorian and early modernist literature puts long overdue pressure on feminism and gay studies to rethink the dominant sexuality in terms of the other heterosexualities it displaces. Luftig puts forth a compelling argument that certain instances of men and women 'seeing together' represent an entirely different kind of pleasure and power which challenges the separation of gendered spheres. He also contends that, for lack of conventions to organize them into this other kind of thing, signs of such friendship inevitably slide back into Victorian heterosexism, where they either indicate denial or elicit gratification."

"Excellent. . . . Looking closely at the 'idioms' associated with friendship between the sexes, Luftig examines literary representations of relations between men and women that are not figured as either sexual or familial. . . . Strongly grounded in narrative theory, engagingly written, and carefully researched, Luftig's book is a useful contribution to Victorian studies, gender studies, and the history of the novel."