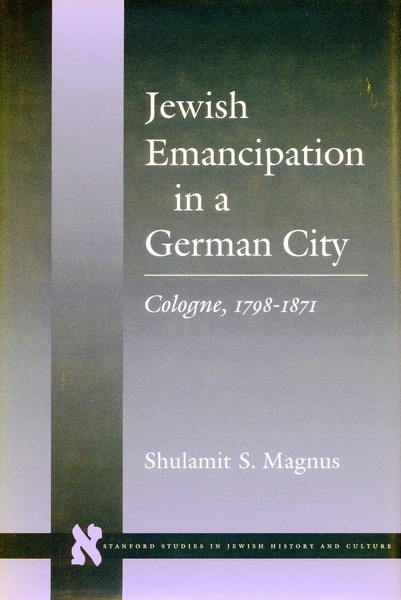 This work seeks to understand how, in nineteenth-century Germany, Jews and non-Jews shaped and experienced Jewish emancipation, a process whereby Jews were freed from ancient discriminatory laws and, over the course of decades, became citizens. Unlike most other works on German Jewish emancipation, this book examines how so fundamental and dramatic a transformation in the relation of Jews and non-Jews was experienced by the people who lived it, how economic, social, political, and ideological forces interacted to bring about change, and how accommodation actually occurred.

The book focuses on Cologne, the most populous and economically powerful city in the Rhineland. Jews, excluded since 1424, returned under French Revolutionary rule, but Napoleonic legislation in 1808 compromised their equality and gave city elders an opportunity to reassert Cologne's historic control when the territory passed to Prussia in 1814. A long struggle between municipal and state authorities ensued, with the city hostile to Jewish rights but ultimately losing its bid to exercise local sovereignty over the Jews.

The 1840’s saw the advent of the railway age, and Cologne's economic and political climate was transformed. The city soon became the center for Rhenish liberal advocacy of Jewish rights, led by regional entrepreneurs in association with Jewish bankers. The author demonstrates, however, that Jewish emancipation was not simply conferred on Jews from above or engineered by financial mavericks in the community. Rather, it occurred as part of a broad societal transformation and as the result of the efforts and behavior of ordinary Jews, whose voices the author records.

The book reveals how such Jews responded to the lure of equality and the pressures of continued discrimination in their business and private lives, and shows how their response fostered a new, positive perception of Jews as honorable people deserving of civic inclusion. It also illustrates how Jews, enjoying unprecedented success and acceptance, fought not only for individual rights but for the right of organized Judaism to achieve a secure place in society.

Shulamit S. Magnus is an Affiliated Scholar at the Stanford University Institute for Research on Women and Gender.

“Magnus has produced a model study of Jewish emancipation in Germany from both Jewish and non-Jewish perspectives. Amassing new archival data, arguing cogently, and writing lucidly, the author explores the move toward the integration of Jews, their rush to take advantage of new opportunities, and an organized Jewish response to the challenges posed by entry into the non-Jewish world. With a balanced eye on the surrounding context, Magnus insightfully illuminates how Jews and non-Jews ‘rewrote the rules of their relationship.’”—Marion Kaplan, Columbia University