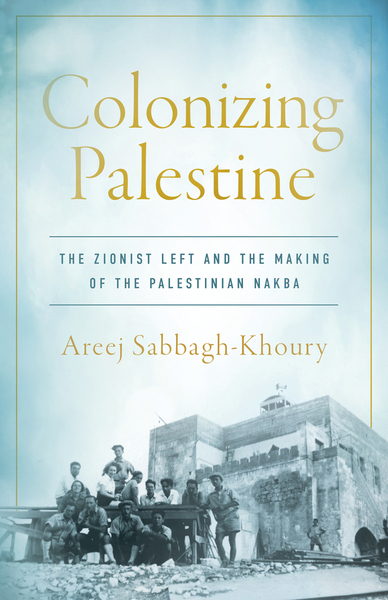 Colonizing Palestine
The Zionist Left and the Making of the Palestinian Nakba
Areej Sabbagh-Khoury
SERIES: Stanford Studies in Middle Eastern and Islamic Societies and Cultures

Among the most progressive of Zionist settlement movements, Hashomer Hatzair proclaimed a brotherly stance on Zionist-Palestinian relations. Until the tumultuous end of the British Mandate, movement settlers voiced support for a binational Jewish-Arab state and officially opposed mass displacement of Palestinians. But, Hashomer Hatzair colonies were also active participants in the process that ultimately transformed large portions of Palestine into sovereign Jewish territory. Areej Sabbagh-Khoury investigates this ostensible dissonance, tracing how three colonies gained control of land and their engagement with Palestinian inhabitants on the edges of the Jezreel Valley/Marj Ibn 'Amer.

Based on extensive empirical research in local colony and national archives, Colonizing Palestine offers a microhistory of frontier interactions between Zionist settlers and indigenous Palestinians within the British imperial field. Even as left-wing kibbutzim of Hashomer Hatzair helped lay the groundwork for settler colonial Jewish sovereignty, its settlers did not conceal the prior existence of the Palestinian villages and their displacement, which became the subject of enduring debate in the kibbutzim. Juxtaposing history and memory, examining events in their actual time and as they were later remembered, Sabbagh-Khoury demonstrates that the dispossession and replacement of the Palestinians in 1948 was not a singular catastrophe, but rather a protracted process instituted over decades. Colonizing Palestine traces social and political mechanisms by which forms of hierarchy, violence, and supremacy that endure into the present were gradually created.

Areej Sabbagh-Khoury is Assistant Professor of Sociology and Anthropology at the Hebrew University of Jerusalem.

"Areej Sabbagh-Khoury's groundbreaking book sheds light on the structures and events that facilitated Zionist settler colonialism in Palestine. A must-read for anyone who wants to understand exactly how the tensions between socialism and Zionism played out on the ground."

"Colonizing Palestine guides us with great precision and acumen through the memory lanes of Israelis and Palestinians. Those who think they have read it all about the Nakba and its impact on our present realities will need to consult this impressive and crucial addition to the literature on settler colonialism and Palestine."