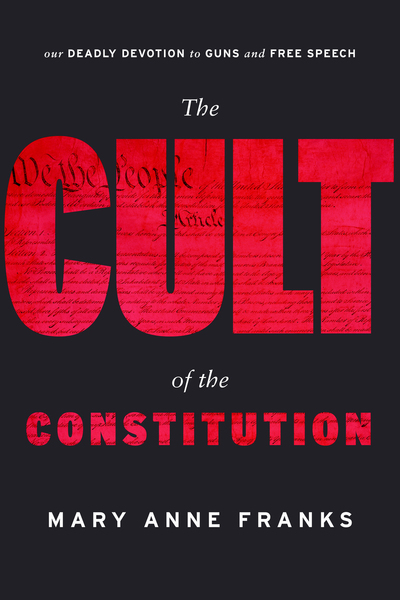 The Cult of the Constitution
Mary Anne Franks

Winner of the 2020 PROSE Award in Legal Studies, sponsored by the Association of American Publishers.

Winner of the 2020 PROSE Award for Excellence in Social Sciences, sponsored by the Association of American Publishers.

Constitutional fundamentalists read the Constitution selectively and self-servingly. Fundamentalist interpretations of the Constitution elevate certain constitutional rights above all others, benefit the most powerful members of society, and undermine the integrity of the document as a whole. The conservative fetish for the Second Amendment (enforced by groups such as the NRA) provides an obvious example of constitutional fundamentalism; the liberal fetish for the First Amendment (enforced by groups such as the ACLU) is less obvious but no less influential. Economic and civil libertarianism have increasingly merged to produce a deregulatory, "free-market" approach to constitutional rights that achieves fullest expression in the idealization of the Internet. The worship of guns, speech, and the Internet in the name of the Constitution has blurred the boundaries between conduct and speech and between veneration and violence.

Mary Anne Franks is Professor of Law at the University of Miami School of Law and President and Legislative & Tech Policy Director at the Cyber Civil Rights Initiative (CCRI). Franks' writing and research have been featured in Time, The New Yorker, The Atlantic, and The Guardian, among other outlets.

"Uncompromisingly critical, Franks challenges both liberal and conservative views of the Bill of Rights in the name of equality. Rights that don't work for the least powerful will ultimately work to preserve the privileges of the most powerful; agree or disagree with Franks's conclusions, her arguments require attention."

"The Cult of the Constitution shows how gun violence, racism, and misogyny are linked by a 'fundamentalist' interpretation of First and Second Amendment rights. Like all fundamentalism, this one tends to reinforce the interests of the powerful and to perpetuate inequality. It doesn't have to be this way. At this moment of #MeToo, #BlackLivesMatter, and #NeverAgain, Mary Anne Franks' book is a necessary reassessment of constitutional orthodoxy. A powerful must-read."

"In this timely book, Mary Anne Franks takes on some of our most divisive constitutional issues. She analyzes gun restrictions, free speech, and regulation of the internet with a firm command of the legal implications and human stakes of judicial decision making. An important and insightful book."

"Mary Anne Franks has written a powerful challenge to the prevailing constitutional orthodoxy of the right and the left. Her trenchant critique of progressives' naive devotion to America's flawed founding charter is provocative and persuasive. A deeply troubling and absolutely vital book."

"This is a worthy addition to the literature of critical legal studies—and a timely text as battles over the Constitution and its interpretation continue to rage."

"The Cult of the Constitution is an extremely important book. Franks challenges scholars and supporters of 20th century liberal constitutionalism to acknowledge its shortcomings in dealing with the technological and social-media-driven realities of the 21st-century....[She] has forced open a new and vital debate about rights, liberties and constitutional government."

"Lost amid the clamor of academic and judicial battles over how to interpret the Constitution is its effect on the most vulnerable....Mary Anne Franks finds that effect by exploring the constitutional fundamentalism underlying much of constitutional law."

The End of an Era, and the Cult of the Constitution

Amicus with Dahlia Lithwick on Slate
More in Law—Constitutional Law and U.S. Courts