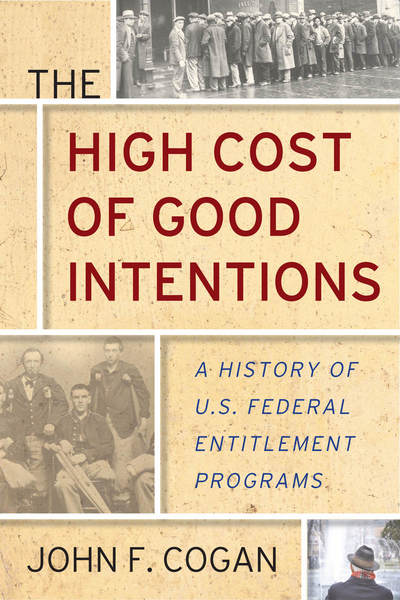 Winner of the 2018 Hayek Book Prize, sponsored by The Manhattan Institute.

Federal entitlement programs are strewn throughout the pages of U.S. history, springing from the noble purpose of assisting people who are destitute through no fault of their own. Yet as federal entitlement programs have grown, so too have their inefficiency and their cost. Neither tax revenues nor revenues generated by the national economy have been able to keep pace with their rising growth, bringing the national debt to a record peacetime level.

The High Cost of Good Intentions is the first comprehensive history of these federal entitlement programs. Combining economics, history, political science, and law, John F. Cogan reveals how the creation of entitlements brings forth a steady march of liberalizing forces that cause entitlement programs to expand. This process—as visible in the eighteenth and nineteenth centuries as in the present day—is repeated until benefits are extended to nearly all who could be considered eligible, and in turn establishes a new base for future expansions. His work provides a unifying explanation for the evolutionary path that nearly all federal entitlement programs have followed over the past two hundred years, tracing both their shared past and the financial risks they pose for future generations.

John F. Cogan is the Leonard and Shirley Ely Senior Fellow at the Hoover Institution and a faculty member in Stanford University's Public Policy Program.

"John Cogan lays bare the historic roots of the most important economic problem confronting American policymakers today: our runaway entitlements juggernaut. In the past half-century it has consumed ten percentage points of GDP, threatening productivity and economic growth. Cogan does not profess to have found an easy, short-term solution to runaway entitlement growth, but his masterful historical perspective does suggest what must be done sooner, rather than later. This is an important and splendid book."

"John Cogan gives us a blockbuster treatise on the history of federal entitlement programs. Part education, part cautionary tale, this richly researched book is above all a fascinating and insightful saga on how and why federal entitlements grow. A valuable guide to the future."

"John Cogan's book is an extensively researched and unbiased examination of how well-intentioned federal entitlement programs have evolved to become our country's number one fiscal challenge. His timely historical work deepens our understanding of how entitlement programs have grown into a costly burden that we ultimately cannot afford. Cogan makes clear that slowing the growth of entitlements is essential and that meeting this challenge is more about simple arithmetic than ideology. This book should be read by anyone interested in addressing our nation's fiscal and economic future, regardless of their political persuasion."

"Finally someone has written a comprehensive history of America's efforts to help worthy groups of Americans: the elderly, the veteran, the less fortunate, and the very young. It is a history of ever more generous help to ever larger groups of people. You can agree or disagree with the merit of all these programs, but the cost is clear, and John Cogan shows why that cost has been either ignored or passed to future generations. The first step in fixing our entitlements is knowing their history. Cogan has now given us that history."

"John Cogan thoroughly reviews one of the greatest challenges facing our country: the unsustainable growth of entitlement spending. He provides a comprehensive view of the issue by looking at the history, the evolution, and the daunting numbers. Cogan brings his extraordinary knowledge and background in economics, fiscal policy, health care, and Social Security to bear in this book to give the reader a full understanding of the roots and the extent of this growing problem that must be tackled."

—Paul D. Ryan, Speaker of the U.S. House of Representatives

"The High Cost of Good Intentions is a thoroughly researched, intellectually serious history of every major American entitlement program, from Revolutionary and Civil War pensions to Social Security, food stamps, and Obamacare. I know of no other work that offers such a comprehensive, readable history of the American welfare state."

"John Cogan's history of federal entitlement programs warns us that the ice we skate on has grown thinner decade by decade....Cogan provides useful case studies of measures that were sensible, self-limiting, and freedom-enhancing like the GI Bill, and current ones that grow as each benefit expansion leads to future entitlements that leave worthy original goals no longer recognizable."

—World Magazine 2017 Books of the Year

"[The book] will surely be of interest to academics, policymakers, and the members of the public with concern for the consequences of entitlements in the United States....[T]his is an easy book to recommend."

"People often wonder how "the land of the free" acquired such a huge government that interferes with so many parts of our lives. Cogan has shown how that happened with entitlement programs, which are a huge part of government."

"John F. Cogan handles the historical details of myriad social programs with considerable competence...This book covers subjects missing from the historical literature and generalizes across cases in useful ways. It will surely aid historians as they write about the modern welfare state."––Edward D. Berkowitz, Journal of American History