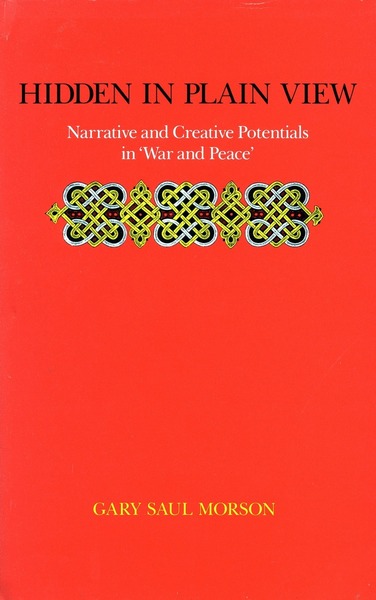 Winner of the 1992 AATSEEL Award for Best Scholarly Book, sponsored by the Am. Assoc. Teachers & Slavic & E. European Lang.

For decades, the formal peculiarities of War and Peace disturbed Russian and Western critics, who attributed both the anomalous structure and the literary power of the book to Tolstoy's "primitive," unruly genius. Using that critical history as a starting point, this volume recaptures the overwhelming sense of strangeness felt by the work's first readers and thereby illuminates Tolstoy's theoretical and narratological concerns.

The author demonstrates that the formal peculiarities of War and Peace were deliberate, designed to elude what Tolstoy regarded as the falsifying constraints of all narratives, both novelistic and historical. Developing and challenging the ideas of Mikhail Bakhtin, Morson explores Tolstoy's account of the work's composition in light of various myths of the creative process. He proposes a theory of "creation by potential" that incorporates Tolstoy's main concerns: the "openness" of each historical moment; the role of chance in history and within narrative patterns; and the efficacy of ordinary events, "hidden in plain view," in shaping history and individual psychology. In his reading of Tolstoy, he demonstrates how we read literary works within the "penumbral text" of associated theories of creativity.

Gary Saul Morson is Professor of Slavic Languages and Comparative Literature at Northwestern University, and the author of The Boundaries of Genre: Dostoevsky's 'Diary of a Writer' and the Traditions of Literary Utopia, and the editor of Literature and History: Theoretical Problems and Russian Case Studies.