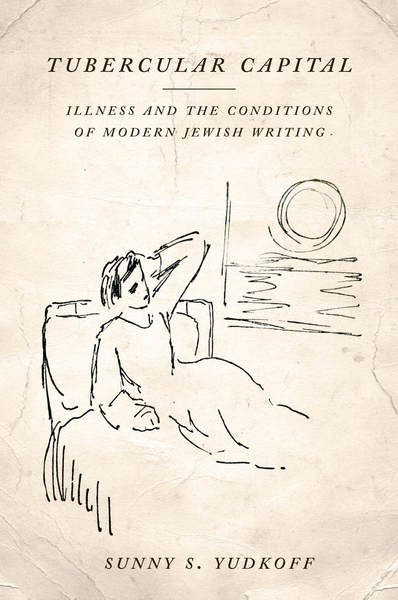 Winner of the 2018 Salo Wittmayer Baron Book Prize, sponsored by the American Academy for Jewish Research.

At the turn of the twentieth century, tuberculosis was a leading cause of death across America, Europe, and the Russian Empire. The incurable disease gave rise to a culture of convalescence, creating new opportunities for travel and literary reflection. Tubercular Capital tells the story of Yiddish and Hebrew writers whose lives and work were transformed by a tubercular diagnosis. Moving from eastern Europe to the Italian Peninsula, and from Mandate Palestine to the Rocky Mountains, Sunny S. Yudkoff follows writers including Sholem Aleichem, Raḥel Bluvshtein, David Vogel, and others as they sought "the cure" and drew on their experiences of illness to hone their literary craft.

Combining archival research with literary analysis, Yudkoff uncovers how tuberculosis came to function as an agent of modern Jewish literature. The illness would provide the means for these suffering writers to grow their reputations and find financial backing. It served a central role in the public fashioning of their literary personas and ushered Jewish writers into a variety of intersecting English, German, and Russian literary traditions. Tracing the paths of these writers, Tubercular Capital reconsiders the foundational relationship between disease, biography, and literature.

Sunny S. Yudkoff is Assistant Professor at the University of Wisconsin–Madison.

"This brilliant study combines thorough historical research with a fine-grained analysis of texts produced under the shadow of the 'White Death,' all framed by a powerful account of the cultural and economic matrix within which both the career of the individual poet and the tradition of tubercular writing are most fruitfully articulated."

"Resisting the sentimental transformation of illness into metaphor described by Susan Sontag, while attending to the persistently romanticized 'consumptive artist,' Sunny Yudkoff's brilliant study provides a new model for understanding the relationship between literary creativity and tuberculosis. Tubercular Capital argues that writers strategically mobilized their tuberculosis, both for their careers and in their work, even as they were laid low by disease. From Sholem Aleichem's 'tubercular Jubilee' to the sickrooms and sanatoria of other Hebrew and Yiddish writers, tuberculosis was inextricable from the burgeoning of early twentieth-century Hebrew and Yiddish literary culture."

"Yudkoff's exploration seamlessly merges speculation with concrete history....Tempting as it may be to imbue illness with its own transcendental power, she chooses to depict its force with a more material and pragmatic truth, warning of the dangerous contortions of pain that come with romanticization."

"This research on the role that tuberculosis played in the lives and creative output of modern Jewish writers is original and fascinating....Highly recommended for academic libraries collecting in the area of Jewish culture and literature."

"A major asset of [Tubercular Capital] is the fact that it retains an unromanticized view of suffering artists, which is even more important when examining their treasured poetic work."