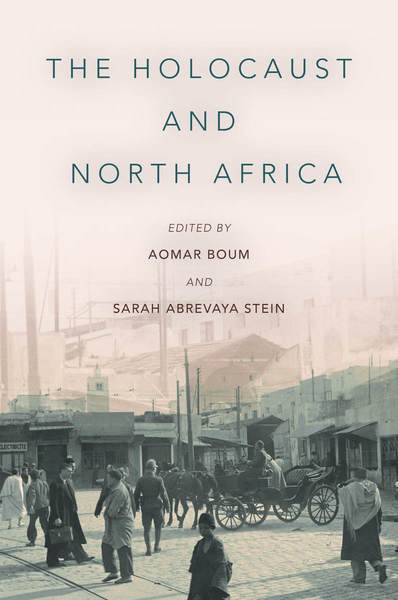 The Holocaust is usually understood as a European story. Yet, this pivotal episode unfolded across North Africa and reverberated through politics, literature, memoir, and memory—Muslim as well as Jewish—in the post-war years. The Holocaust and North Africa offers the first English-language study of the unfolding events in North Africa, pushing at the boundaries of Holocaust Studies and North African Studies, and suggesting, powerfully, that neither is complete without the other.

The essays in this volume reconstruct the implementation of race laws and forced labor across the Maghreb during World War II and consider the Holocaust as a North African local affair, which took diverse form from town to town and city to city. They explore how the Holocaust ruptured Muslim–Jewish relations, setting the stage for an entirely new post-war reality. Commentaries by leading scholars of Holocaust history complete the picture, reflecting on why the history of the Holocaust and North Africa has been so widely ignored—and what we have to gain by understanding it in all its nuances.

Published in association with the United States Holocaust Memorial Museum.

Sarah Abrevaya Stein is Professor of History at the University of California, Los Angeles.

"The Holocaust and North Africa extends the geographical and historical horizons of Holocaust studies. It challenges a Eurocentric focus, exploring the diverse persecution experiences and memories of Jews in North and West Africa, and raises interesting questions about the interdependencies of Nazi, Vichy, and fascist policies with colonial practices."

"As the contributors to this volume demonstrate, it is important to understand how ordinary Muslims comprehended what was happening to their Jewish neighbors, to their country, and to themselves under Nazi and Vichy oversight. Even more importantly, we must understand the experience of the North African Jews themselves. Boum and Stein's book is a good start."

"This collection of fifteen essays and commentaries by noted scholars constitutes an invaluable contribution to the growing body of literature on the Holocaust, North Africa, and the Middle East....The wealth of new sources both primary and secondary that they have uncovered bodes well for the expansion of our knowledge and understanding of the Shoah in its connections with North Africa."

"[This] is an important and timely book....a unique and welcome addition to our understandings of the mid-twentieth century Maghreb, the death throes of European colonization, the Shoah, and the ways in which these sites, events, and memories continue to shape the Mediterranean region today."

"[A] rich and illuminating volume, which, in my view, fully achieves its aims. The essays enrich our understanding of how the Holocaust unfolded in North Africa, most notably by unveiling the deep entanglement between colonialism and fascism....[The Holocaust and North Africa] shows the fruitfulness of a joint work of reflection, scrutiny, and interpretation."

"[A] exceptionally valuable volume focusing on an area of study far too long in the shadows....The Holocaust and North Africa is an absorbing work that will undoubtedly whet the appetite of many a student of the Holocaust, eager to know more about what happened to Jews in that part of the world during the war years."

"The underlying agenda of The Holocaust and North Africa is to encourage further, in-depth research in this hitherto neglected area of study. Even at this relatively late stage of Holocaust historiography, there are archives and testimonies waiting to be examined and deciphered. As shown in these essays, comparative research does not imply the drawing of similarities between situations, but rather a deeper understanding of the complex mosaic of the Holocaust—confined neither to Europe nor to European Jews."