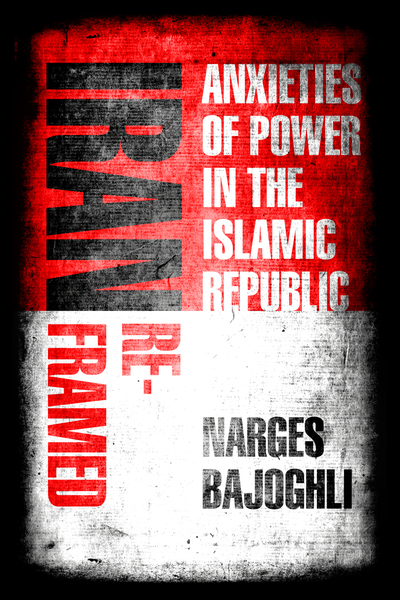 Winner of the 2020 Margaret Mead Award, sponsored by the American Anthropological Association (AAA) and Society for Applied Anthropology (SfAA).

An inside look at what it means to be pro-regime in Iran, and the debates around the future of the Islamic Republic.

More than half of Iran's citizens were not alive at the time of the 1979 Revolution. Now entering its fifth decade in power, the Iranian regime faces the paradox of any successful revolution: how to transmit the commitments of its political project to the next generation. New media ventures supported by the Islamic Republic attempt to win the hearts and minds of younger Iranians. Yet members of this new generation—whether dissidents or fundamentalists—are increasingly skeptical of these efforts.

Iran Reframed offers unprecedented access to those who wield power in Iran as they debate and define the future of the Republic. Over ten years, Narges Bajoghli met with men in Iran's Revolutionary Guard, Ansar Hezbollah, and Basij paramilitary organizations to investigate how their media producers developed strategies to court Iranian youth. Readers come to know these men—what the regime means to them and their anxieties about the future of their revolutionary project. Contestation over how to define the regime underlies all their efforts to communicate with the public. This book offers a multilayered story about what it means to be pro-regime in the Islamic Republic, challenging everything we think we know about Iran and revolution.

Narges Bajoghli is Assistant Professor of Middle East Studies at the School of Advanced International Studies, Johns Hopkins University. She has written for the New York Times Magazine, the Guardian, and the Washington Post, and has appeared as a commentator on NPR, PBS, and the BBC. She is the director of the documentary The Skin That Burns, screened at The Hague, Hiroshima, Jaipur, and film festivals throughout the United States.

"In this beautifully written and extraordinarily rich book, Narges Bajoghli demonstrates a deep anxiety within the Iranian regime about how to transmit the ideology of the Revolution forty years on. With Iran Reframed, we come to understand the contradictions and frustrations behind the regime's justifications of its past, present, and imagined future."

—Sherine F. Hamdy, author of Our Bodies Belong to God: Organ Transplants, Islam, and the Struggle for Human Dignity in Egypt

"Iran Reframed is incomparable. A must-read on Iran's media landscape and paramount for anyone who wants to understand Iran as it really is. Gripping and provocative."

"Iran Reframed offers marvelously original insight into one of the world's most misunderstood countries. Narges Bajoghli reflects on the success and failure of revolutions, the meaning of ideology, youth and aging, and the ways politics seeks to address deep human longings."

—Stephen Kinzer, author of All the Shah's Men: An American Coup and the Roots of Middle East Terror

"[A] lively book that offers great insight into the mindset and approach of the officials who try to keep the Islamic Revolution, and the regime it produced, alive by producing promotional material, documentaries about the Iran-Iraq War, and rap-filled music videos extolling the nation and its heroes. Highly recommended."

"Iran Reframed is a courageous journey into the contradictions within the ideological apparatus of the Islamic Republic of Iran....Bajoghli's book is essential reading for anyone interested in media warfare in the twenty-first century and understanding the nuances of Iranian politics."

"Empathetic and provocative at the same time, this is a compelling book for anyone who wants to understand Iran as it exists today."

“All Sides Need to Begin to De-escalate”: Tensions Between Iran, U.K. & U.S. Spark Fears of War

Democracy Now!
How Trump Sanctions on Iran Will Worsen the Pandemic