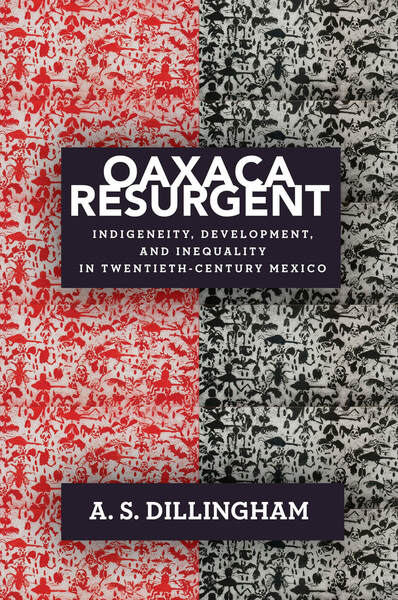 Winner of the 2022 Erminie Wheeler-Voegelin Prize, sponsored by the American Society for Ethnohistory.

Oaxaca Resurgent examines how Indigenous people in one of Mexico's most rebellious states shaped local and national politics during the twentieth century. Drawing on declassified surveillance documents and original ethnographic research, A. S. Dillingham traces the contested history of indigenous development and the trajectory of the Mexican government's Instituto Nacional Indigenista, the most ambitious agency of its kind in the Americas. This book shows how generations of Indigenous actors, operating from within the Mexican government while also challenging its authority, proved instrumental in democratizing the local teachers' trade union and implementing bilingual education. Focusing on the experiences of anthropologists, government bureaucrats, trade unionists, and activists, Dillingham explores the relationship between indigeneity, rural education and development, and the political radicalism of the Global Sixties.

By centering Indigenous expressions of anticolonialism, Oaxaca Resurgent offers key insights into the entangled histories of Indigenous resurgence movements and the rise of state-sponsored multiculturalism in the Americas. This revelatory book provides crucial context for understanding post-1968 Mexican history and the rise of the 2006 Oaxacan social movement.

A. S. Dillingham is a citizen of the Choctaw Nation of Oklahoma and Assistant Professor of History at Arizona State University.

"Thoroughly researched and wonderfully written, Oaxaca Resurgent vividly portrays how bilingual teachers and other indigenista brokers managed to resist, selectively accept, and reshape developmentalist policies and multicultural state projects throughout the 20th century. Based on surveillance documents from Mexican Intelligence Services as well as oral interviews he conducted in Spanish and Mixtec, a language he learned as his intellectual and personal life became increasingly intertwined with the destiny of Oaxaca, Dillingham works with care and empathy, persuasively arguing that Oaxaca's gift for our contemporary world resides in the indomitable energy and plurality of vision of its many indigenous communities."

"Oaxaca Resurgent provides a wide-ranging analysis of the tug of war between Mexico's developmentalist policy and historic strategies of indigenous resistance. With careful attention to state projects and grassroots initiatives, Dillingham offers a compelling picture of the institutions, actors and ideologies that shaped the politics of indigeneity in the complex and dynamic terrain of Oaxaca."

—Tanalís Padilla, author of Rural Resistance in the Land of Zapata

"A. S. Dillingham's meticulous archival and oral reconstruction places Mixtec intellectuals and activists at the center of indigenista thinking and development schemes: authoring, appropriating, retooling, and transforming every aspect of indigenismo for their own purposes, from the postrevolutionary period to the neoliberal present. Dillingham brings to life three generations of activists who came to political maturity under that mantle of indigenismo, transforming its meaning from the inside out, and tracing how these Mixtec actors contributed to the resurgence of indigenous anticolonial and autonomy movements that swept the hemisphere in the second half of the 20th century. A must read for hemispheric Native American and indigenous scholars."

—María Josefina Saldaña-Portillo, author of Indian Given: Racial Geographies across Mexico and the United States

"Those of us who have conducted archival research on indigenista development and education sometimes struggle to highlight the indigenous brokers who were trained and paid to carry out these programs. In this book, Dillingham supplements his archival work with a healthy dose of interviews to shine a light on these critical actors. Indigenous men (and, later, women) used the crisis of Mexican indigenismo, Echeverría's 'opening' and his Third-Worldist discourse, and the politics of the New Left to push for multicultural state development and education programs. Dillingham restores agency to these people, which may be this fine book's greatest contribution."

"Dillingham's use of local archives and oral histories reconstructs how teachers and activists pursued their own goals within state and party institutions, undermining many of these institutions in the long run... Oaxaca Resurgent undoubtedly adds a regional perspective and original evidence to the ongoing debate about the nature of Mexico's postrevolutionary state."– Emilio de Antuñano, Hispanic American Historical Review

"Oaxaca Resurgent brings together two important conversations in Mexican Indigenous history: the ongoing colonialism of national development and the longstanding Indigenous resistance. Using twentieth-century Oaxaca both as case study and as exemplar, Dillingham offers an illuminating window into Indigenous political activism in the face of postrevolutionary state appropriation of Indigenous culture and history. Examining what he calls the 'double bind of indigenismo,' a space for Indigenous resurgence that emerges from the tension between state constructions of Indigeneity and the strategic deployment of those constructions by Native peoples from the state of Oaxaca, Dillingham carefully reconstructs how Indigenous individuals and communities forwarded—and continue to forward—their own anticolonial projects by leveraging and undermining nationalistic invocations of Indigeneity. The book draws on an impressive range of sources, including declassified surveillance documents and oral histories, and it is beautifully written. This innovative work will resonate broadly with Indigenous activists and scholars alike."

"In the face of more than a century of scholarship that has made Oaxaca and its peoples an object of inquiry—in archaeology, anthropology, sociology, and other fields—this wide-ranging study instead demonstrates the many ways that Oaxacans have made themselves the subjects of their own history. ...Dillingham's argument is the assertion that this multiculturalism was not merely an identity based strategy of the state to incorporate Indigenous Mexicans into an increasingly austere, neoliberal economy. He shows instead that the struggle for multicultural recognition maintained its class character, serving as a source of organizing power especially for the dissident teachers-union movement that flourished in Oaxaca and directly challenged the hegemony of the ruling party."

"A.S. Dillingham weaves together a powerful story of resistance in one of Latin America's most culturally rich regions... The value this important study brings to the field is that it uncovers the long history of indigenous activism that survived and even thrived despite the oppressive nature of one of the longest-lived political regimes of the Western Hemisphere, a testament to the will of Oaxaca's communities."

—James A. Garza, The Americas

"Oaxaca Resurgent is an outstanding book. Dillingham's analysis is sharp and conclusive but measured.... By embedding his analysis in layers of context, Dillingham tells a universal story, moved by the ebbs and flows of global intellectual sea change, yet never loses sight of the small group of Indigenous bilingual teachers from Oaxaca who drive his story, who are here not relegated to dancing for the approbation of the state."

This is Hell!
In Oaxaca, Indigenous People Are the Vanguard