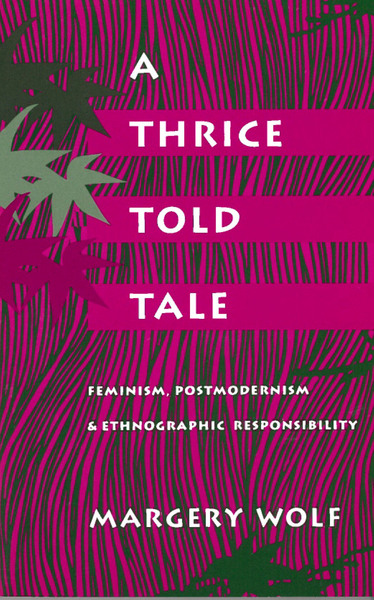 A Thrice-Told Tale is one ethnographer's imaginative and powerful response to the methodological issues raised by feminist and postmodernist critics of traditional ethnography. The author, a feminist anthropologist, uses three texts developed out of her research in Taiwan—a piece of fiction, anthropological fieldnotes, and a social science article—to explore some of these criticisms.

Each text takes a different perspective, is written in a different style, and has different "outcomes," yet all three involve the same fascinating set of events. A young mother began to behave in a decidedly abherrant, perhaps suicidal manner, and opinion in her village was sharply divided over the reason. Was she becoming a shaman, posessed by a god? Was she deranged, in need of physical restraint, drugs, and hospitalization? Or was she being cynically manipulated by her ne'er-do-well husband to elicit sympathy and money from her neighbors? In the end, the woman was taken away from the area to her mother's house. For some villagers, this settled the matter; for others the debate over her behavior was probably never truly resolved.

The first text is a short story written shortly after the incident, which occurred almost thrity years ago; the second text is a copy of the fieldnotes collected about the events covered in the short story; the third text is an article published in 1990 in American Ethnologist that analyzes the incident from the author's current perspective. Following each text is a Commentary in which the author discusses such topics as experimental ethnography, polyvocality, authorial presence and control, reflexivity, and some of the differences between fiction and ethnography.

The three texts are framed by two chapters in which the author discusses the genereal problems posed by feminist and postmodernist critics of ethnography and presents her personal exploration of these issues in an argument that is strongly self-reflexive and theoretically rigorous. She considers some feminist concerns over colonial research methods and takes issues with the insistence of some feminists tha the topics of ethnographic research be set by those who are studied. The book concludes with a plea for ethnographic responsibility based on a less academic and more practical perspective.

"A Thrice-Told Tale provides enjoyable fiction, important glimpses of fieldwork methodology, first-rate feminist analysis, and stimulating polemic. It can be used with students—of history, women's studies and other fields in addition to anthropology."