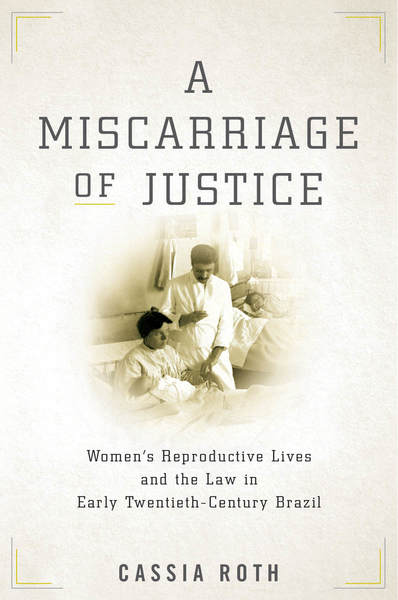 "Cassia Roth's lively and well-researched book,A Miscarriage of Justice, is a welcome addition to [writing reproduction into the history of human society]. This exploration of the politics of reproduction in twentieth-century Rio de Janeiro operates on two levels. First, the author attends to the political, medical, and legal discourses and practices that constructed and, with varying degrees of success, sought to regulate women's reproductive lives. Second, she pays careful attention to the meanings and experiences of reproduction for pregnant and parturient women themselves, as well as for their families and communities."

"A Miscarriage of Justice is an impeccably researched feminist history of reproduction that centers the lives and deaths of women in the Brazilian capital of Rio de Janeiro during the early 20th century...Highly recommended."

"A Miscarriage of Justice's main contribution lies in contextualizing the stories of women who appeared in investigations and judicial courts as suspects of abortions and infanticides and bringing their lived experiences to the forefront of the scholarship on gender, law, patriarchy, and motherhood in the twentieth-century Latin America."

"Perhaps most powerfully, A Miscarriage of Justice deepens our historical understanding of the repressive laws and excessive medical interventions with which Brazilian women must contend in their experiences of fertility control, pregnancy, childbirth, and motherhood today."

—Adam Warren, Bulletin of the History of Medicine

"This is an outstanding historical study. Cassia Roth consistently demonstrates sensitivity to complexity and nuance without losing the thread of her argument. ... A Miscarriage of Justiceis an absorbing read."