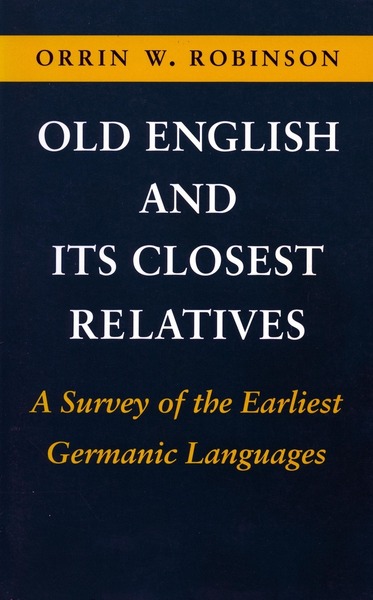 Old English and Its Closest Relatives
A Survey of the Earliest Germanic Languages
Orrin W. Robinson

At first glance, there may seem little reason to think of English and German as variant forms of a single language. There are enormous differences between the two in pronunciation, vocabulary, and grammar, and a monolingual speaker of one cannot understand the other at all. Yet modern English and German have many points in common, and if we go back to the earliest texts available in the two languages, the similarities are even more notable.

How do we account for these similarities? The generally accepted explanation is that English and German are divergent continuations of a common ancestor, a Germanic language now lost. This book surveys the linguistic and cultural backgrounds of the earliest kown Germanic languages, members of what has traditionally been known as the English family tree: Gothic, Old Norse, Old Saxon, Old English, Old Frisian, Old Low Franconian, and Old High German.

For each language, the author provides a brief history of the people who spoke it, an overview of the important texts in the language, sample passages with full glossary and word-by-word translations, a section on orthography and grammar, and discussion of linguistic or philological topics relevant to all the early Germanic languaes but best exemplified by the particular language under consideration. These topics inclued the pronunciation of older languages; the runic inscriptions; Germanic alliterative pietry; historical syntax, borrowing, analogy, and drift; textual transmission; and dialect variation.

"The task of writing a book like Robinson's is very difficult. His contains much to be admired and is a worthy handbook ... Good students can learn much from the wealth of information in the present work, and it is to be recommended to them."

—Journal of English and Germanic Philology

"This generally engaging work is well-thought out and well-organized. . . . Robinson has written [a book] that deserves attention."

"[Old English and its closest relatives] is well designed and well written. It is thorough, yet not too encumbered by linguistic facts and linguistic jargon. . . . [Robinson's] goal, to introduce the reader to the earliest Germanic languages and their interdialectal relations, has been masterfully accomplished."

"There is much to be valued in this book, the strength of which lies in bringing together representative texts and concise but generally informative discussions of historical background, grammar, versification, and the like, and unified by chapters on the Germanic language family and its grammatical system."

"This book certainly fills a gap. Without it, one would have to assemble a set of handbooks of the old dialects. These would have the disadvantage of various degrees of outdatedness and divergent arrangement of materials. Robinson brings the grammatical material into alignment in a manageable number of features, selected for their significance as means of comparison. . . . The readings give some impression of the variety of language and genre, while the tribal histories add a touch of life to a possibly dry topic. . . . The focus of the work is linguistic, and in this respect there is much to admire in the selection and parallel organization of the material."

"The execution of Old English and its closest relatives is workmanlike and conscientious. It is appropriate as a textbook for students who have had no prior exposure to [the Germanic] discipline and who require only a general introduction; it will certainly appeal to the curious lay reader. The book's serviceability in the classroom is assured in a sense for the simple reason that there is no other single work that covers the material summarily."

"General textbooks introducing the Germanic languages are scarce. This work claims to provide a resource available to monolingual English speakers with a minimal background in linguistics. The task seems hardly possible, but Robinson accomplishes it and he does so with flying colors. . . . In general, Robinson's text is pedagogically sound and definitely recommended either on the undergraduate level or in an introductory class for graduate students filling in a linguistics requirement."

"Orin W. Robinson's Old English and its closest relatives makes an extremely valuable contribution to the group of texts that specialists in one or more of the historical Germanic dialects can safely rely upon for introducing students to comparative Germanic historical linguistics."

"Robinson has produced a highly useful book. Designed for an "Introduction to Germanic Languages" course, it will also be a welcome supplement for courses in the history of English, German, and the other Germanic languages. . . . [A] book that instructors would be wise to bring to the attention of students, since it will contribute clarity as well as understanding of important matters in philology and linguistics, in addition to the opportunity for ready introduction to the early Germanic languages. Instructors as well as students will be grateful to Robinson. . . ."

“This well-structured, terse account of the early Germanic languages fills an obvious gap in reference books on historical linguistics. Striking an excellent balance between readability for the nonspecialist and sufficient detail for classroom usage, the volume begins with a straightforward chapter on the background of English and German in the Germanic family of languages and the Indo-European system at large. . . . Extremely useful for linguistics and medieval literature courses at all levels; belongs in all college and university libraries.”—Humanities