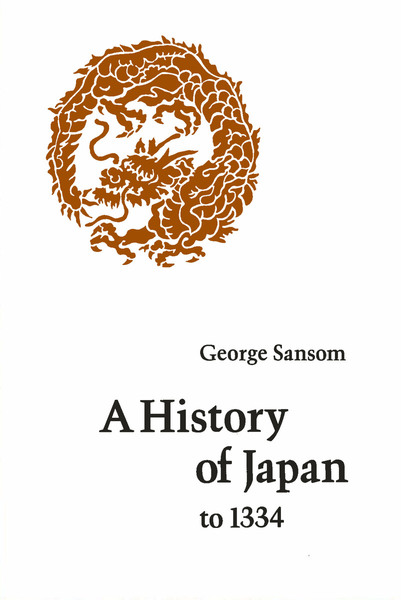 A History of Japan to 1334
George Sansom

This is a straightforward narrative of the development of Japanese civilization to 1334 by the author of Japan: A Short Cultural History. While complete in itself, it is also the first volume of a three-volume work which will be the first large-scale, comprehensive history of Japan.

Taken as a whole, the projected history represents the culmination of the life work of perhaps the most distinguished historian now writing on Japan. Unlike the renowned Short Cultural History, it is concerned mainly with political and social phenomena and only incidentally touches on religion, literature, and the arts. The treatment is primarily descriptive and factual, but the author offers some pragmatic interpretations and suggests comparisons with the history of other peoples.

A History of Japan to 1334 describes the growth from tribal origins of an organized state on a Chinese model, gives a picture of the life of the Royal Court, and examines the conflict between a polished urban nobility and a warlike rural gentry. It traces the evolution of an efficient system of feudal government which deprived the sovereign of all but his ritual functions and the prestige of his ancestry. The structure of Japanese feudal society is depicted in some detail and explained in terms of its internal stresses and its behavior in peace and war, especially during the period of the Mongol attacks in the last decades of the thirteenth century. The volume ends with the collapse of the feudal government at Kamakura under the attack of ambitious rivals.