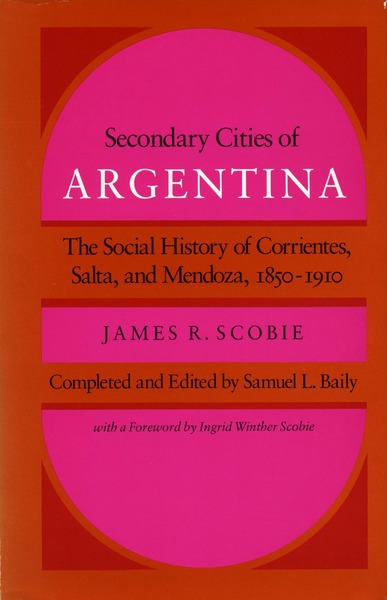 This study of three Argentine provincial capitals introduces a new concept in Latin American urban studies: the historical role of secondary cities, settlements large enough to possess all the elements commonly associated with urban areas and yet too small to figure among a country's major cities.

The principal contribution of the book is to explain how and why smaller cities grew. What determined and shaped their growth? How did local inhabitants, and especially the dominant social elites, react to internal and external influences? To what extent were they able to control growth? What relationships developed with the surrounding regions and the outside world?

The study shows that secondary cities linked rural economies and inhabitants with the outside world while insulating the traditional rural environment from the changing character of large urban centers. In this intermediate position, economic relationships and social structure changed slowly, and only in response to outside innovations such as railroads. Continuity within the secondary centers thus reinforced conservatism, accentuated the gap between the major cities and the rest of the country, and contributed to the resistance to change that characterizes much of Latin American today. The book is illustrated with photographs and maps.

The late James R. Scobie was Professor of History at the University of California, San Diego.