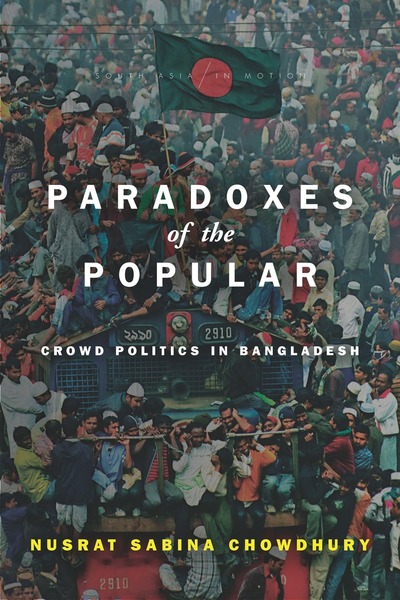 Few places are as politically precarious as Bangladesh, even fewer as crowded. Its 57,000 or so square miles are some of the world's most inhabited. Often described as a definitive case of the bankruptcy of postcolonial governance, it is also one of the poorest among the most densely populated nations. In spite of an overriding anxiety of exhaustion, there are a few important caveats to the familiar feelings of despair—a growing economy, and an uneven, yet robust, nationalist sentiment—which, together, generate revealing paradoxes. In this book, Nusrat Sabina Chowdhury offers insight into what she calls "the paradoxes of the popular," or the constitutive contradictions of popular politics. The focus here is on mass protests, long considered the primary medium of meaningful change in this part of the world. Chowdhury writes provocatively about political life in Bangladesh in a rich ethnography that studies some of the most consequential protests of the last decade, spanning both rural and urban Bangladesh. By making the crowd its starting point and analytical locus, this book tacks between multiple sites of public political gatherings and pays attention to the ephemeral and often accidental configurations of the crowd. Ultimately, Chowdhury makes an original case for the crowd as a defining feature and a foundational force of democratic practices in South Asia and beyond.

"Richly ethnographic, this study of an environmental movement in Bangladesh takes a fresh and contemporary look at the role of the crowd in democratic politics, distinguishing it from the citizen and the people. Focusing on such everyday phenomena as money, ID cards, accidents, and social media, Nusrat Chowdhury provides unusual glimpses into emotions such as hope, despair, opportunism, and fear that animate crowds assembled for political action."

"Theorists of democracy and public life have long been unsettled by the unstable energy of popular assemblies—their capacity both to destroy and create, to betray authority and imagine it anew. Chowdhury's bold, compelling analysis, in contrast, puts the paradoxical power of the street at the center of Bangladeshi history: the spontaneous crowd, she shows, is the very embodiment of popular sovereignty, conjuring the volatile fervor and the 'imperceptible politics' that fuel mass democracy, not only in South Asia, but way beyond."

"Chowdhury's fascinating ethnography of popular protest in Bangladesh will resonate far beyond her home discipline of anthropology. Paradoxes of the Popular makes an essential contribution to the study of crowd politics in the international contexts of modern mass democracy."

"[Paradoxes of the Popular] introduces readers to a novel theoretical terrain, and notions such as the 'imperceptible politics' of mass protests and the act of 'seeing like a crowd' force a reappraisal of anthropological approaches to 'public' life and space. In an era of rising populism, Chowdhury's ethnography has much to offer scholars interested in mass democracy and its inherent paradoxes in South Asia and beyond. Highly recommended."

"[A] especially rich ethnography of the political....Paradoxes of the Popular shows how mass feelings (from fear and despair to joy and possibility) become political, and how the political (from notions of democracy to demagoguery) is conceptualized in the everyday. The book will be of special interest to scholars and graduate students interested in contemporary Bangladesh, South Asian democracies, and political anthropology more generally."