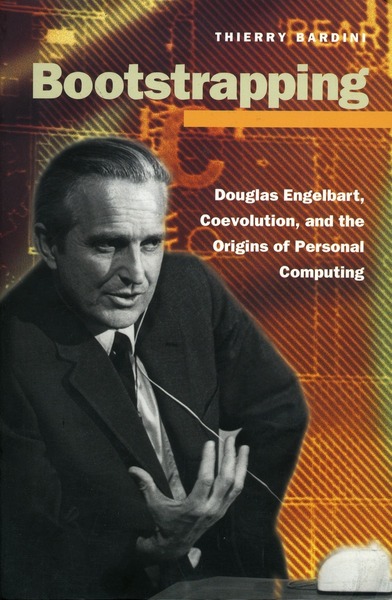 Bootstrapping analyzes the genesis of personal computing from both technological and social perspectives, through a close study of the pathbreaking work of one researcher, Douglas Engelbart. In his lab at the Stanford Research Institute in the 1960s, Engelbart, along with a small team of researchers, developed some of the cornerstones of personal computing as we know it, including the mouse, the windowed user interface, and hypertext. Today, all these technologies are well known, even taken for granted, but the assumptions and motivations behind their invention are not. Bootstrapping establishes Douglas Engelbart's contribution through a detailed history of both the material and the symbolic constitution of his system's human-computer interface in the context of the computer research community in the United States in the 1960s and 1970s.

Engelbart felt that the complexity of many of the world's problems was becoming overwhelming, and the time for solving these problems was becoming shorter and shorter. What was needed, he determined, was a system that would augment human intelligence, co-transforming or co-evolving both humans and the machines they use. He sought a systematic way to think and organize this coevolution in an effort to discover a path on which a radical technological improvement could lead to a radical improvement in how to make people work effectively. What was involved in Engelbart's project was not just the invention of a computerized system that would enable humans, acting together, to manage complexity, but the invention of a new kind of human, "the user." What he ultimately envisioned was a "bootstrapping" process by which those who actually invented the hardware and software of this new system would simultaneously reinvent the human in a new form.

The book also offers a careful narrative of the collapse of Engelbart's laboratory at Stanford Research Institute, and the further translation of Engelbart's vision. It shows that Engelbart's ultimate goal of coevolution came to be translated in terms of technological progress and human adaptation to supposedly user-friendly technologies. At a time of the massive diffusion of the World Wide Web, Bootstrapping recalls the early experiments and original ideals that led to today's "information revolution."

Thierry Bardini is Associate Professor in the Department of Communication at the Université de Montréal.

"Bootstrapping fills an important gap in the story of personal computing."

"Thierry Bardini particularly explores the theoretical and conceptual underpinnings of Engelbart's book. . . . Indeed, the breadth of Engelbart's contributions and influence, documented in meticulous detail, are astonishing. . . ."

"Anyone who has worked in computer-human interface or in and around Silicon Valley institutions such as SRI, Xerox PARC, IBM Almaden Research Center or Apple Computer will certainly relish this book. Moreover, those in a private, government or non-profit office filled with the fruits of contemporary productivity technology will appreciate Bardini's tales of politics, committees, funding and grants, demos to funders and skeptical management, and all those fascinating projects at PARC and SRI."