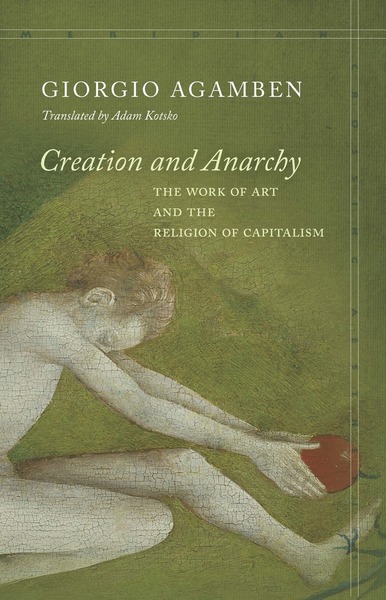 Creation and Anarchy
The Work of Art and the Religion of Capitalism
Giorgio Agamben, Translated by Adam Kotsko
SERIES: Meridian: Crossing Aesthetics

Creation and the giving of orders are closely entwined in Western culture, where God commands the world into existence and later issues the injunctions known as the Ten Commandments. The arche, or origin, is always also a command, and a beginning is always the first principle that governs and decrees. This is as true for theology, where God not only creates the world but governs and continues to govern through continuous creation, as it is for the philosophical and political tradition according to which beginning and creation, command and will, together form a strategic apparatus without which our society would fall apart.

The five essays collected here aim to deactivate this apparatus through a patient archaeological inquiry into the concepts of work, creation, and command. Giorgio Agamben explores every nuance of the arche in search of an an-archic exit strategy. By the book's final chapter, anarchy appears as the secret center of power, brought to light so as to make possible a philosophical thought that might overthrow both the principle and its command.

Giorgio Agamben is a contemporary Italian philosopher and political theorist whose works have been translated into numerous languages. His most recent title with Stanford University Press is What Is Real? (2018).

"Adam Kotsko's lucid translation has continued his service to the field in making Agamben's texts accessible to a wider readership."