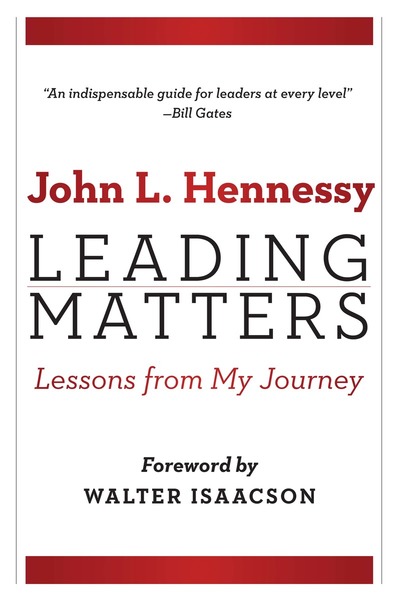 Hennessy's approach to leadership is laser-focused on the journey rather than the destination. Each chapter in Leading Matters looks at valuable elements that have shaped Hennessy's career in practice and philosophy. He discusses the pivotal role that humility, authenticity and trust, service, empathy, courage, collaboration, innovation, intellectual curiosity, storytelling, and legacy have all played in his prolific, interdisciplinary career.

Hennessy takes these elements and applies them to instructive stories, such as his encounters with other Silicon Valley leaders including Jim Clark, founder of Netscape; Condoleezza Rice, former U.S. Secretary of State and Stanford provost; John Arrillaga, one of the most successful Silicon Valley commercial real estate developers; and Phil Knight, founder of Nike and philanthropist with whom Hennessy cofounded Knight-Hennessy Scholars at Stanford University.

Across government, education, commerce, and non-profits, the need for effective leadership could not be more pressing. This book is essential reading for those tasked with leading any complex enterprise in the academic, not-for-profit, or for-profit sector.

John L. Hennessy is Chairman of the Board of Alphabet and Director of Knight-Hennessy Scholars, the largest fully endowed graduate-level scholarship program in the world. He serves on the Board of Directors for Cisco Systems and the Board of Trustees for the Gordon and Betty Moore Foundation. The tenth President of Stanford University, he is also a computer scientist who co-founded MIPS Computer Systems and Atheros Communications. Hennessy and David Patterson were awarded the ACM A.M. Turing Prize for 2017.

"John Hennessy is Silicon Valley's gold standard. In both business and academia, he is the true measure of enlightened leadership and rock-solid integrity, paving the way for and acting as inspiration to the new generation of entrepreneurs. It is a cause for celebration that he has finally put his wisdom and experiences into print."

"Leading Matters is a gorgeous, inspirational, and essential handbook for the leaders we all hope to be. John Hennessy shares more than 90 life lessons in leadership -- lessons learned as an entrepreneur, professor, and president of one of the world's great universities. Ranging from artificial intelligence to the arts to the value of empathy, John's stories are a rare gift for the courageous, humble servant leader inside each of us. Now, more than ever, we need this book."

"In this book, John Hennessy shares deep insights gained from a phenomenal career as an engineer, an entrepreneur, and the president of a world-class university. It's an indispensable guide for leaders at every level."

"For me, John Hennessy is one of the great university presidents. Leading Matters is a must read. As an alumnus, I take great pride that my alma mater had such a leader at its helm. With this great book, he leads us still."

"This book is just like its author: humble, empathetic, courageous and very smart. It tells leaders a hard truth: successful leadership isn't just about confidence or expertise. It also requires the harder-won qualities of humility and empathy. John came by these lessons honestly and is now generously sharing them with a new generation of leaders."

"John Hennessy was a transformational president for Stanford University. In this insightful book, he provides a "how to" guide that will benefit leaders from all walks of life. And it's a good read too -- with wonderful examples of how to marry vision and execution in the face of both challenges and opportunities on the road to change."

"In Leading Matters, John Hennessy challenges each of us to consider how we can develop our own leadership style. His powerful insights—informed by his long and distinguished tenure as president of Stanford University—are about grounding leadership in empathy, courage, and service. This book is a guide for leading in good and tough times alike—and for helping raise the next generation of leaders."

—Sheryl Sandberg, COO of Facebook and Founder of LeanIn.Org and OptionB.Org