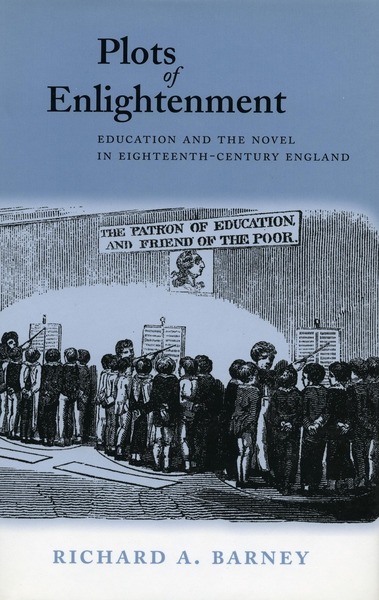 Plots of Enlightenment
Education and the Novel in Eighteenth-Century England
Richard A. Barney

Plots of Enlightenment explores the emergence of the English novel during the early 1700s as a preeminent form of popular education at a time when educators were defining a new kind of "modern" English citizenship for both men and women. This new individual was imagined neither as the free, self-determined figure of early modern liberalism or republicanism, nor, at the other extreme, as the product of a nearly totalized disciplinary regimen. Instead, this new citizen materialized from the tensile process of what the sociologist Pierre Bourdieu calls "regulated improvisation," a strategy of performed individual identity that combines both social orchestration and individual agency.

This book considers how the period's diverse forms of educational writing (including chapbooks, conduct books, and philosophical treatises) and the most innovative educational institutions of the age (such as charity schools, working schools, and proposed academies for young women) produced a shared concept of improvised identity also shaped by the early novel's pedagogical agenda. The model of improvised subjectivity contributed to new ways of imagining English individuality as both a private and public entity; it also empowered women authors, both educators and novelists, to transform traditional ideals of femininity in forming their own protofeminist versions of enlightened female identity.

While offering a comprehensive account of the novel's educational status during the Enlightenment, Plots of Enlightenment focuses particularly on the first half of the eighteenth century, when novelists such as Daniel Defoe, Eliza Haywood, and Charlotte Lennox were first exploring concepts of fictional character based on educational and moral improvisation. A close examination of these authors' work illustrates further that by the 1750s, the improvisational impulse in England had forged the first perceptible outlines of the fictional subgenre later called the novel of education or the Bildungsroman. This book is the first study of its kind to account for the complex interplay between the individualist and collectivist protocols of early modern fiction, with an eye toward articulating a comprehensive description of socialization and literary form that can accommodate the similarities and differences in the works of both male and female writers.

Richard A. Barney is Associate Professor of English at the University of Oklahoma.

"Establishes more flexible and generous ways of thinking about this subject than those offered in earlier works in the field. . . . The body of Barney's book is occupied by some wonderfully alert and sophisticated close readings of key works of pedagogical theory."

"[A] well-written and intelligent study . . . .critically convincing and highly readable."