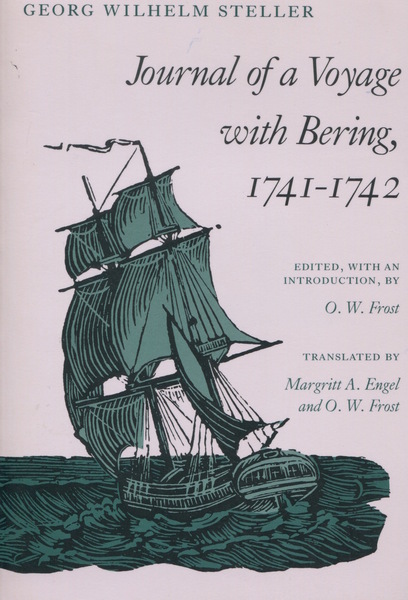 Journal of a Voyage with Bering, 1741-1742
Georg Wilhelm Steller Edited, with an Introduction, by O. W. Frost Translated by Margitt A. Engel and O. W. Frost

The European discovery of the northwest coast of America is fully and dramatically recorded in this journal, an invaluable historical and scientific source document. It is also a gripping narrative of human conflict, of nature as the overwhelming adversary, of terror and pain and death, and of final deliverance.

In the service of the Russian tsarina, the German naturalist Steller accompanied the great Danish explorer Vitus Bering on a voyage that survived shipwreck and unimaginable hardship to mark the beginning of Alaska's recorded history. This book is a new translation and annotation of Steller's journal of that voyage and the first to be based completely upon a surviving copy of Steller's manuscript dated 1743 (previous translation had been based on a 1793 edition). The journal is the best known of Steller's writings, not so much because of events along the way, or its biological and anthropological observations, not even because of the momentous sight of the Alaskan coast and the subsequent landings, but because of the harrowing events of the return voyage.

Thirty-two men of the 78 who set sail died, including Bering himself; 46 survived shipwreck in the winter of 1741-42 on a treeless, uninhabited island, and returned finally to home port on Kamchatka in a small vessel built from timbers of the wrecked ship. On the island, Bering and his lieutenant had become too ill to function and Steller found himself taking the lead in organizing work parties, finding antiscorbutic plant and animal food, nursing the six, and cheering the depressed—actions that kept all from perishing.

Margritt A. Engle teaches German at the University of Alaska, Anchorage.