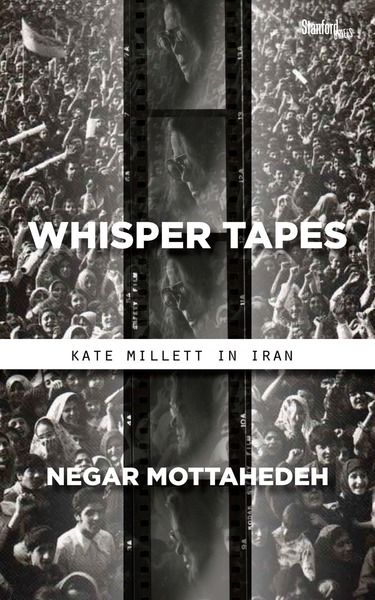 Kate Millett was already an icon of American feminism when she went to Iran in 1979. She arrived just weeks after the Iranian Revolution, to join Iranian women in marking International Women's Day. Intended as a day of celebration, the event turned into a week of protests. Millett, armed with film equipment and a cassette deck to record everything around her, found herself in the middle of demonstrations for women's rights and against the mandatory veil.

Listening to the revolutionary soundscape of Millett's audio tapes, Negar Mottahedeh offers a new interpretive guide to Revolutionary Iran, its slogans, habits, and women's movement—a movement that, many claim, Millett never came to understand. Published with the fortieth anniversary of the Iranian Revolution and the women's protests that followed on its heels, Whisper Tapes re-introduces Millett's historic visit to Iran and lays out the nature of her encounter with the Iranian women's movement.

Negar Mottahedeh is Associate Professor of Literature at Duke University. She is the author of #iranelection: Hashtag Solidarity and the Transformation of Online Life (Stanford, 2015), among other books.

"Lyrical, intelligent, and passionately written,Whisper Tapes reignites a long dormant conversation about the urgency of global feminism. This book is intensely relevant as we continue to assess the aftermath of revolutions throughout the Middle East, and the ways they have been fueled by women's rage on the one hand and unfulfilled hope for gender equity on the other."

"Whisper Tapes is a fascinating book that illuminates the muddled state of affairs that unfolded in Iran at the celebration of International Women's Day in 1979. In offering a deeply contingent history, Negar Mottahedeh beautifully shows Kate Millett's simultaneous closeness to and distance from the events surrounding her."

"By embedding her analysis in responsible histories of Iran and its place on the international stage, Mottahedeh masterfully deconstructs the biases of American feminism and how they have influenced Millett's understanding of the experiences of Iranian women in a postrevolutionary society. Lyrical in style and poetic in meaning, Whisper Tapes challenges readers to adopt an intersectional view of Iranian feminist movements while adding layers and dimensionality to Millett's preexisting literature."––Aisha Jitan, The Middle East Journal

Our Woman in Tehran: Kate Millett and the Iranian revolution

Book Forum
When the Revolution Left Kate Millet Behind