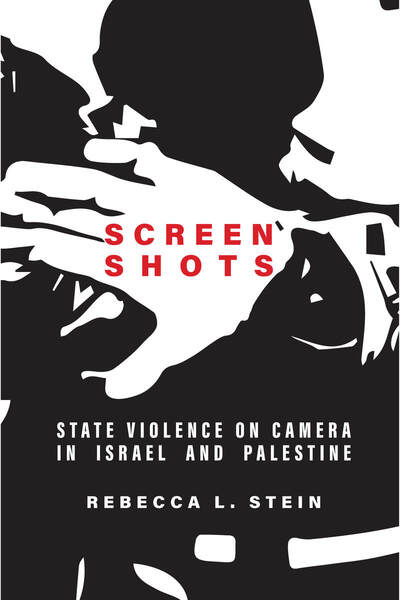 In the last two decades, amid the global spread of smartphones, state killings of civilians have increasingly been captured on the cameras of both bystanders and police. Screen Shots studies this phenomenon from the vantage point of the Israeli occupation of Palestinian territories. Here, cameras have proliferated as political tools in the hands of a broad range of actors and institutions, including Palestinian activists, Israeli soldiers, Jewish settlers, and human rights workers. All trained their lens on Israeli state violence, propelled by a shared dream: that advances in digital photography—closer, sharper, faster—would advance their respective political agendas. Most would be let down.

Drawing on ethnographic work, Rebecca L. Stein chronicles Palestinian video-activists seeking justice, Israeli soldiers laboring to perfect the military's image, and Zionist conspiracy theorists accusing Palestinians of "playing dead." Writing against techno-optimism, Stein investigates what camera dreams and disillusionment across these political divides reveal about the Israeli and Palestinian colonial present, and the shifting terms of power and struggle in the smartphone age.

Rebecca L. Stein is Associate Professor of Anthropology at Duke University. She is the author of Digital Militarism: Israel's Occupation in the Social Media Age (Stanford, 2015, with Adi Kuntsman) and Itineraries in Conflict: Israelis, Palestinians, and the Political Lives of Tourism (2008).

"Screen Shots teaches as it describes, instructs as it unsettles what we know about the expanse and limits of digital photography in the civilian landscapes of perpetual war, of photographic encounters with Israel state violence in the occupied Palestinian territories over the last two decades. Avoiding a predictable rehearsal of digital photography as a versatile and effective weapon of war, Screen Shots strikes precisely and pointedly elsewhere: at the political nerve of visualized failures, at the unnerving state of faulty images and unsteady cameras not properly loaded, apertures not set for the scale of violence confronted, witnessing that misses its mark.

Screen Shots makes evident what aperture settings can't tell: how the images captured at once buttress and undermine claims of brutalizing settlers, humanitarian NGOs, and Palestinian activists—depending on what sits resolutely askew or adjacent to the photographer's lens. In this war of images, none of those tasked with recording can wholly control how violence will be applauded or vilified, how perpetrators will be cast, and how those images and their self-proclaimed heroes will be politically framed. In the end, Rebecca L. Stein's lucid account both acknowledges and defies the grotesque features of this infamously ugly military occupation."

"In Palestine perhaps more than anywhere else, political struggle has hinged in recent years on video technology's promise of a perfect witnessing: the fantasy that oppression can be recorded with such absolute transparency that it will compel viewers to act. Writing with great clarity and unflinching rigor, Rebecca L. Stein focuses on the inevitable failures of this dream and the emergence of the visual as yet another painfully contested battlefield. Screen Shots is an elegant, sobering work, and should be required reading for anyone interested in cutting through the colonialist myths that obscure the brutal realities of the occupation—and that still set the terms of its media representation."

—Ben Ehrenreich, author of The Way to the Spring: Life and Death in Palestine

"Since its invention, photography has changed the way people see, and represent, themselves and others. Digital photography in the early 21st century has had an even more profound impact not only on how a conflict, like the one in Palestine, is seen and presented, but also on the political discourse and its visual articulation by the participants themselves. Rebecca L. Stein's Screen Shots is the first book to examine how digital photography impacted everyday practice under military occupation. It constitutes a very important addition to the fields of Palestine, postcolonial, and visual studies. The book functions both as a chronicle of photographed social life, as well as the political function of the photography. It is a must-read for anyone interested in Palestine."

"Videos of human rights violations are a new form of testimony that require deep attentiveness to the multiple ways that politics are inscribed in images. In Screen Shots, Rebecca L. Stein's literary sensitivity to technology, media, and law inhabits the multi-dimensional space opened up by these images."

Rebecca Stein on War in the Smartphone Age