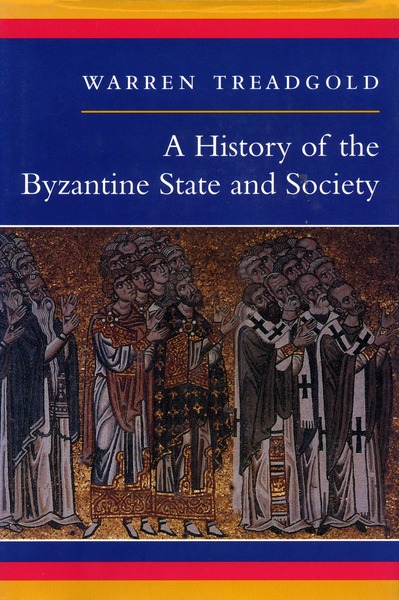 A History of the Byzantine State and Society
Warren Treadgold

This is the first comprehensive and up-to-date history of Byzantium to appear in almost sixty years, and the first ever to cover both the Byzantine state and Byzantine society. It begins in A.D. 285, when the emperor Diocletian separated what became Byzantium from the western Roman Empire, and ends in 1461, when the last Byzantine outposts fell to the Ottoman Turks.

Spanning twelve centuries and three continents, the Byzantine Empire linked the ancient and modern worlds, shaping and transmitting Greek, Roman, and Christian traditions—including the Greek classics, Roman law, and Christian theology—that remain vigorous today, not only in Eastern Europe and the Middle East but throughout Western civilization. Though in its politics Byzantium often resembled a third-world dictatorship, it has never yet been matched in maintaining a single state for so long, over a wide area inhabited by heterogeneous peoples.

Drawing on a wealth of original sources and modern works, the author treats political and social developments as a single vivid story, told partly in detailed narrative and partly in essays that clarify long-term changes. He avoids stereotypes and rejects such old and new historical orthodoxies as the persistent weakness of the Byzantine economy and the pervasive importance of holy men in Late Antiquity.

Without neglecting underlying social, cultural, and economic trends, the author shows the often crucial impact of nearly a hundred Byzantine emperors and empresses. What the emperor or empress did, or did not do, could rapidly confront ordinary Byzantines with economic ruin, new religious doctrines, or conquest by a foreign power. Much attention is paid to the complex life of the court and bureaucracy that has given us the adjective "byzantine." The major personalities include such famous names as Constantine, Justinian, Theodora, and Heraclius, along with lesser-known figures like Constans II, Irene, Basil II the Bulgar-Slayer, and Michael VIII Palaeologus.

Byzantine civilization emerges as durable, creative, and realistic, overcoming repeated setbacks to remain prosperous almost to the end. With 221 illustrations and 18 maps that complement the text, A History of the Byzantine State and Society should long remain the standard history of Byzantium not just for students and scholars but for all readers.

Warren Treadgold is Professor of History at Florida International University. He is the author of, most recently, Byzantium and Its Army, 284-1081 (Stanford, 1995).

"A vivid story of Byzantium's existence over the span of 1,100 years. . . . Drawing on the latest scholarship and written for both the general reader and the scholar, this work may well become the standard English-language history of Byzantium."

"Fluently written for the general reader—few will tire of its 850 pages of text—its coherent account reflects the most up-to-date scholarship."