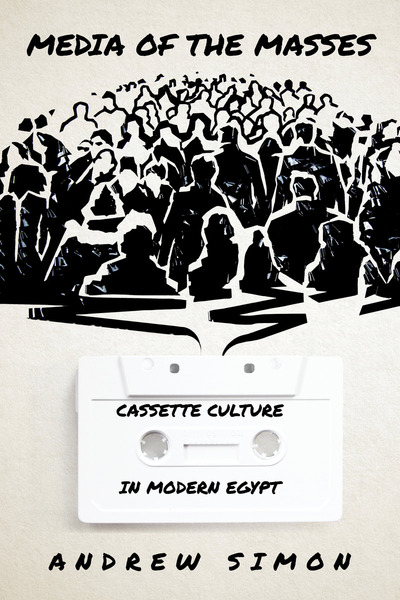 Media of the Masses investigates the social life of an everyday technology—the cassette tape—to offer a multisensory history of modern Egypt. Over the 1970s and 1980s, cassettes became a ubiquitous presence in Egyptian homes and stores. Audiocassette technology gave an opening to ordinary individuals, from singers to smugglers, to challenge state-controlled Egyptian media. Enabling an unprecedented number of people to participate in the creation of culture and circulation of content, cassette players and tapes soon informed broader cultural, political, and economic developments and defined "modern" Egyptian households.

Drawing on a wide array of audio, visual, and textual sources that exist outside the Egyptian National Archives, Andrew Simon provides a new entry point into understanding everyday life and culture. Cassettes and cassette players, he demonstrates, did not simply join other twentieth century mass media, like records and radio; they were the media of the masses. Comprised of little more than magnetic reels in plastic cases, cassettes empowered cultural consumers to become cultural producers long before the advent of the Internet. Positioned at the productive crossroads of social history, cultural anthropology, and media and sound studies, Media of the Masses ultimately shows how the most ordinary things may yield the most surprising insights.

"Andrew Simon's masterful history of the cassette crystallizes the crucial importance of technology. Media of the Masses is methodologically innovative, working through materials that were part of everyday life, but rarely present in archives. Important for historians of modern Egypt, and a stellar contribution to the history of new media."

"When much thinking about media focuses on technologies of the future, Andrew Simon's Media of the Masses is a refreshing look at the near past, when palm-sized cartridges decentralized communication decades before satellites or the internet entered our daily lives. An important contribution to Arab media studies and the history of technology."

"Media of the Masses provides a new lens through which we can understand the history of Egyptian media—the once-ubiquitous technology of cassette tapes. Andrew Simon's 'mixtape' approach offers insightful analysis and paints a rich picture useful for scholars and students alike."

"Andrew Simon's new book, Media of the Masses: Cassette Culture in Modern Egypt... looks at the cassette tape as a mode of understanding Egypt's history during [the] 1970s and 1980s. Moving from homes to shops, and from singers to listeners, the book demonstrates how the cassette, an artifact that became immensely popular in the Middle East in these years, undid state power and the division between public and private."

"In this social history of music and technology, Simon demonstrates how audiocassettes allowed ordinary Egyptians to challenge the power of state-controlled media. It is the story of how a common piece of technology can have an extraordinary impact on culture, politics, and the lives of the people who use it."

Seizing the Means of Audio Production