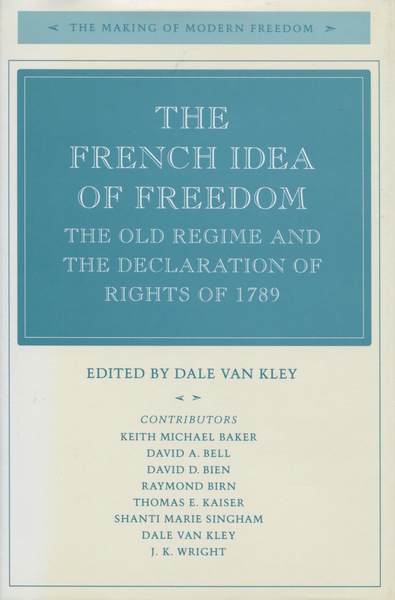 The French Idea of Freedom
The Old Regime and the Declaration of Rights of 1789
Edited by Dale Van Kley
SERIES: The Making of Modern Freedom

“The Declaration of the Rights of Man and the Citizen of 1789” is the French Revolution’s best known utterance. By 1789, to be sure, England looked proudly back to the Magna Carta, the Petition of Right, and a bill of rights, and even the young American Declaration of Independence and the individual states’ various declarations and bills of rights preceded the French Declaration. But the French deputies of the National Assembly tried hard, in the words of one of their number, not to receive lessons from others but rather “to give them” to the rest of the world, to proclaim not the rights of Frenchmen, but those “for all times and nations.”

The chapters in this book treat mainly the origins of the Declaration in the political thought and practice of the preceding three centuries that Tocqueville designated the “Old Regime.” Among the topics covered are privileged corporations; the events of the three months preceding the Declaration; blacks, Jews, and women; the Assembly’s debates on the Declaration; the influence of sixteenth-century notions of sovereignty and the separation of powers; the rights of the accused in legal practices and political trials from 1716 to 1789; the natural rights to freedom of religion; and the monarchy’s “feudal” exploitation of the royal domain.