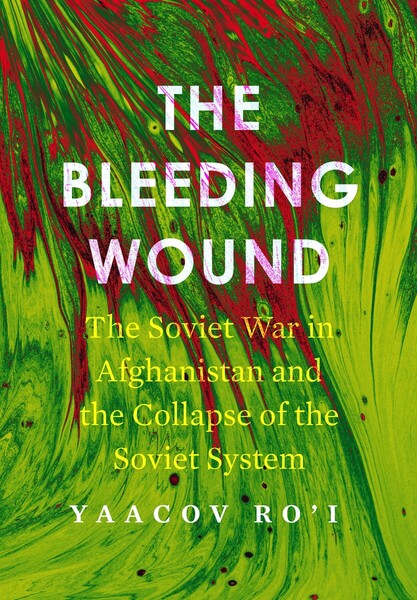 The Bleeding Wound
The Soviet War in Afghanistan and the Collapse of the Soviet System
Yaacov Ro'i
SERIES: Cold War International History Project

By the mid-1980s, public opinion in the USSR had begun to turn against Soviet involvement in Afghanistan: the Soviet–Afghan War (1979–1989) had become a long, painful, and unwinnable conflict, one that Mikhail Gorbachev referred to as a "bleeding wound" in a 1986 speech. The eventual decision to withdraw Soviet troops from Afghanistan created a devastating ripple effect within Soviet society that, this book argues, became a major factor in the collapse of the Soviet Union.

In this comprehensive survey of the effects of the war on Soviet society and politics, Yaacov Ro'i analyzes the opinions of Soviet citizens on a host of issues connected with the war and documents the systemic change that would occur when Soviet leadership took public opinion into account. The war and the difficulties that the returning veterans faced undermined the self-esteem and prestige of the Soviet armed forces and provided ample ammunition for media correspondents who sought to challenge the norms of the Soviet system. Through extensive analysis of Soviet newspapers and interviews conducted with Soviet war veterans and regular citizens in the early 1990s, Ro'i argues that the effects of the war precipitated processes that would reveal the inbuilt limitations of the Soviet body politic and contribute to the dissolution of the USSR by 1991.

Yaacov Ro'i is Professor Emeritus at the Cummings Center for Russian and East European Studies at Tel Aviv University.

"Encyclopedic and compelling, this meticulously researched book synthesizes the latest scholarship on the Soviet Afghan war. With original survey data and the comprehensive analysis of a decade of Soviet media and public opinion, Yaacov Ro'i shows clearly how Soviet participation in the Afghan war undermined faith in Soviet ideals and accelerated the Soviet collapse."

"Yaacov Ro'i had the prescience to study the Soviet-Afghan War's effect on veterans and civilians at a time when most observers could only speculate about how the war would affect the USSR and the newly independent states. This book brings his original research into dialogue with new work and materials that have become available in intervening decades. An important and timely study that anyone interested in the region should read."

"Ro'i has done students of the Soviet-Afghan War a great service in synthesizing a wealth of sources and setting out a highly detailed account of the effects of the war, and has done so in a readable style that makes the book accessible for novice and expert alike. This thorough book is a very welcome addition to the field and is set to become a standard work."