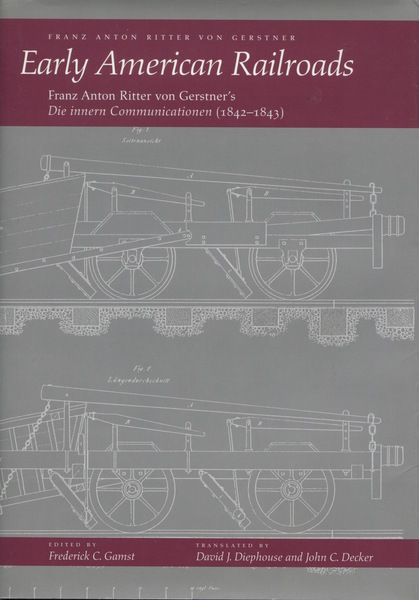 This is the first English translation of a monumental account of American railroads (and canals) in the years 1838-1839. Its author, Franz Anton Ritter von Gerstner, was Europe's leading authority on railroad construction, and he conducted his study at the behest of the Russian government, which rightly felt that the United States would provide a more suitable model for the construction of a Russian railroad system than England. For a century and a half, Gerstner's Die innern Communicationen has been recognized as by far the most comprehensive and detailed work on the development, construction, finance, and operation of early American railroads and canals, enriched by accounts of the pioneering men who were involved in the enterprise that was to transform the century.

Most of the technological data presented is to be found nowhere else; for example, virtually every technique for constructing the various kinds of track is explained and illustrated by line drawings. Gerstner supplemented his first-hand observations of every railroad in the United States with data from transportation companies and government documents, including the amounts, dimensions, and kinds of rolling stock, personnel, funds dispersed, revenues collected, ton-miles of freight, and seat-miles of passengers. Throughout, Gerstner's insights and commentary reflect his vast experience and knowledge of railroads (he built what is often called the first railroad on the European continent and the first Russian railroad).

Gerstner went beyond technology to examine the management and organization of railroads and canals and to review the structures and responsibilities of state boards for the oversight of transportation firms. In addition, he included vivid accounts of many aspects of American culture, such as early "Jim Crowism," with blacks traveling in baggage cars rather than coaches, and the horrific working conditions of both free laborers and slaves (the highly profitable Tallahassee Railroad owned its own slaves for working on the line). All in all, the publication in English of Gerstner's encyclopedic work is a major event in the economic and transportation history of the United States.

Frederick C. Gamst is Professor of Anthropology at the University of Massachusetts at Boston. He is the author and editor of many books in the fields of anthropology, organizational theory, and American railroads.

"Although it is structured with encyclopedic qualities, the narrative reads surprisingly well. . . . A handsome tome, with especially appealing reproductions of an extensive number of engineering drawings."

—Journal of the Early Republic

"This voluminous book is a superb source for early American transportation history . . . a wealth of data not matched anywhere else."